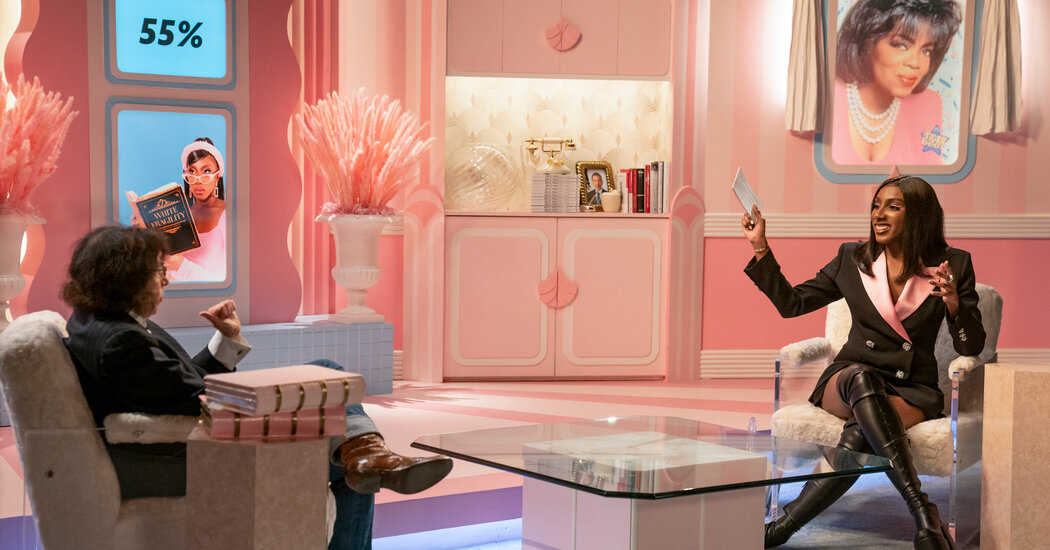 In the first episode of her new variety series on Showtime, the comedian Ziwe Fumudoh asks the writer Fran Lebowitz: “What bothers you more: slow walkers or racism?”

“This character is hyperbolic,” Ms. Fumudoh said a few days before the premiere of “Ziwe.” “It’s only hyperbole that somebody would ask that question. And you see that reflected in how I dress.”

Ms. Fumudoh was explaining how the wardrobe for the series came together: a tornado of pink that has sucked up a few feather boas, a mountain of crystal embellishments and an assortment of fuzzy hats, plastic visors, tiny sunglasses and opera gloves. When the costume designer Pamela Shepard-Hill would add a ring to an outfit, Ms. Fumudoh would ask for six more, “and then let’s do a cuff that’s entirely made of diamonds,” she said.

On “Ziwe,” whether during a confrontational interview or parody music video, Ms. Fumudoh plays an audacious, quick-witted consumerist, whose attitude and armor is inspired by an unholy marriage of Dionne from “Clueless” and Paris Hilton in “The Simple Life,” along with a few other ultrafeminine pop culture figures of the 1990s and aughts. (In a sketch about plastic surgery, she wears matching pink sweatpants and a sleeveless crop top, wordlessly making a reference to Amy Poehler’s desperate mom from “Mean Girls.”)

As a comedian who became famous for making people uncomfortable with questions about race and class, Ms. Fumudoh, 29, uses fashion like a weapon, creating an air of innocence with her Delia’s catalog looks, then slicing through it with the sharp heel of a Barbie stiletto.

She is also an exceptionally physical performer, writhing and jumping through her musical numbers, whether channeling a jazzy “Chicago” siren or a girl-group member, circa 1999. Extensive legs-in-the-air choreography had to be taken into consideration when planning her ensembles, Ms. Shepard-Hill said.

“We would have fittings, and I would be like, ‘OK, do your choreography,’” she said. “Then instantly: ‘That’s inappropriate. Take that off. That’s actually not OK for Showtime.”

For the music videos in particular, hyperbolic Ziwe borrows from the real Ziwe’s closet. In a song called “Stop Being Poor” (a joke, in Episode 3, about people who believe being poor is a choice), Ms. Fumudoh wears a skintight all-crystal minidress by Aidan Euan of Akna.

In the 1920s-inspired number “Lisa Called the Cops on Black People,” she wears her own off-the-shoulder black velvet-and-mesh catsuit by LaQuan Smith.

When putting together a mood board for the show, Ms. Shepard-Hill included iconic — a favorite “Ziwe” adjective — models like Donyale Luna and Naomi Campbell, as well as rappers like Rico Nasty and Saweetie. She included Josephine Baker, the music-hall star and World War II spy, too.

“It was a real range of women that span time but are all iconic in their visuals, iconic in their style and sensibility,” said Ms. Shepard Hill, 37, who is also a stylist and instructor at Parsons School of Design.

But in creating her wardrobe, Ms. Fumudoh was also thinking about the white comedians who dominate late-night TV and how to portray herself as the opposite of the suit-wearing men she calls “Jimmy, Jimmy, John, John,” whose wood-heavy sets are “really, really masculine — all blues and blacks and sharp images.”

“If all of late night is painted with masculinity, my show is hyper-feminine,” she said. “I wear a lot of sparkles. You would never have seen John Oliver in a choker.

“When I was growing up, and especially when I first started in media, the idea was to downplay your femininity. If a woman wants to be taken seriously, she wears glasses and pants and she talks with a lower voice like she works for Theranos.”

On the wall of the set where Ms. Fumudoh conducts her interviews, there’s a large photo of a young Oprah Winfrey, who deeply influenced “Ziwe,” Ms. Fumudoh said. The Meghan Markle and Prince Harry interview was broadcast the night before the team began cutting the show, and the drama of it “really shaped the way we framed every episode.” It’s not a stretch to imagine Ziwe delivering the same scene-stealing “silent or silenced” line.

There’s something else about the plastered photo of Ms. Winfrey that feels tied to “Ziwe”: In it, she’s wearing pink and pearls. Early in her career, Ms. Winfrey found a way to ask tough questions while communicating her femininity.

In the first episode of “Ziwe,” when Ms. Fumudoh sits across from Ms. Lebowitz, Ms. Fumudoh wears a short black blazer dress with electric pink lapels, and her own thigh-high chunky-heel leather boots. It’s not a designer piece; it’s available at AD Los Angeles for $149.

Despite the opulent aesthetic of “Ziwe,” the costume budget was somewhat limited, in part because it’s a new show, Ms. Shepard-Hill said. The dream, if there’s a second season? “A whole in-house team, where everything could be custom-built from head to toe,” she said.

The blazer dress outfit was originally intended for a sketch in which Ziwe, channeling a billionaire Marilyn Monroe acolyte, announces her candidacy for New York City mayor. (“Gone are the days of old white men abusing the office of the mayor to do crooked favors for their ugly friends. Because I don’t have any friends, and I only do favors for myself.”)

But Ms. Fumudoh felt strongly about wearing it for the first episode instead, using it to set that subversive anti-late-night host tone for the series.

“That pink lapel is such a splash accent that it really captures what the show is,” she said. “All the outfits are telling a story in, like, 19 different ways, beyond the actual text that we write and say.”