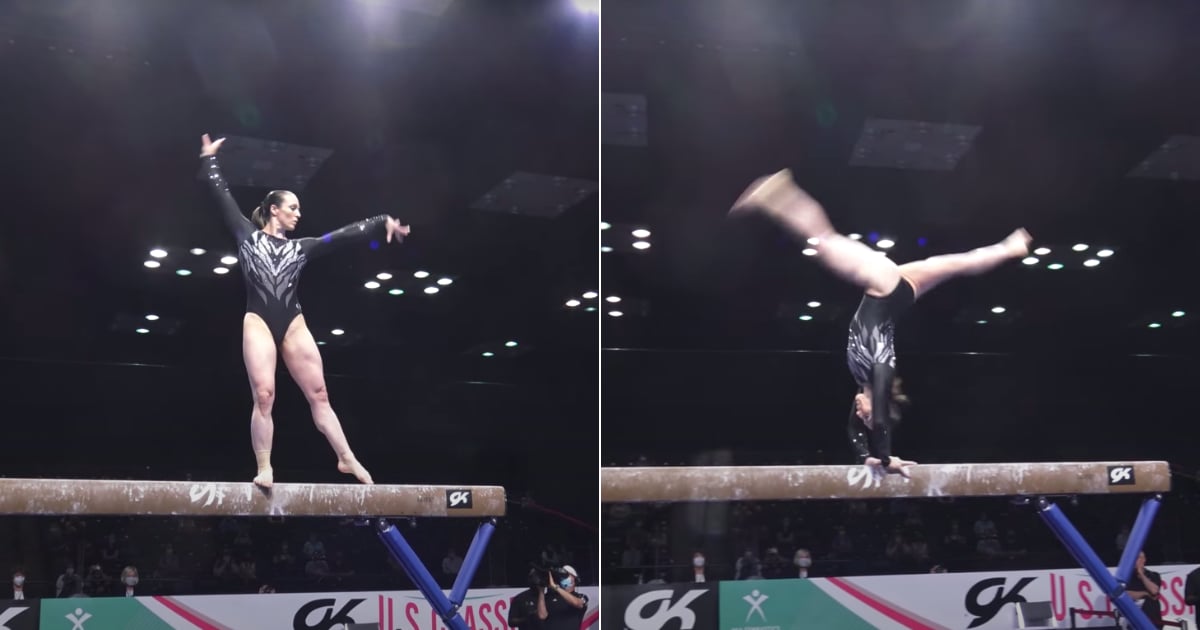 The 2021 GK US Classic was Chellsie Memmel’s first competition since she retired from gymnastics in 2012. She’s the 2005 world all-around champion, and she received team silver at the 2008 Beijing Games. Now 32 (turning 33 next month) and a mom of two, Memmel returned to the national stage on May 22 after declaring a comeback last summer and documenting her journey on social media along the way. She competed in two events — vault and beam — in the first session of the US Classic.

On vault, Memmel performed a high-flying Yurchenko full in a laid-out position, which scored a 13.750. On beam, she nailed her back handspring step-out to two layout step-outs as well as her front tuck. Memmel received an 11.800 for that beam routine, having fallen on her Arabian, essentially a half turn into a front flip, and wobbling on her illusion turn. When POPSUGAR spoke with Memmel last August, she said one of her comeback goals was solidifying a piked Arabian on beam, and while she did not showcase it on May 22, she started working on the skill in practice during the COVID-19 pandemic. If she were to land it successfully at a major FIG competition, it would be named after her.

“Very weird walking into the arena as a gymnast again but amazing at the same time,” Memmel, who’s coached by her dad, wrote on Twitter at the conclusion of podium training on May 21. “Everyone was so welcoming and supportive and I couldn’t have asked for a better first time back out on the floor.” She then wrote, “Thank you for following along on this journey that has lead to my first competition in 9 years…here goes nothing!”

Nine years have passed, but Memmel is proving that hard work truly can pay off and a sport that’s long been known to have a time limit once gymnasts reach their 20s doesn’t need to close its doors on athletes after a certain age. “I also want to just be able to inspire people and moms, especially moms, to take some time to do something for yourself,” she told us last year. “Sometimes we get a little bit lost and tied up in our kids, and that’s not a bad thing at all, but I feel like I’m a better mom when I have some time to do things for myself.”

In an interview after her US Classic session concluded, Memmel said, “I feel like this is a win,” adding that she didn’t know what to expect with her nerves. “I felt really good. It felt great to start on vault with one of my best vaults of the weekend. Obviously, beam didn’t go as well as I wanted, but I am happy. I put myself out there, and I couldn’t have asked for a better day.”

Memmel continued on to say that she’s motivated by her love for the sport: “I’m not gonna get sick of saying this, and I’m not gonna stop saying it because that’s really the biggest driving force of just enjoying doing gymnastics.” It’s those hard days where she remembers, “‘You’re just pushing yourself. You’re having fun. You’re seeing how far you can actually take this when people said you should have retired when you were 20 or when you were 24, [or] you can’t have kids and come back to a sport.'” That way of thinking, she stated, “I feel is so backwards, but that’s what we think is true, and it’s not true. For me, I just want to put that message out to anybody who thought they missed their chance at something or didn’t get a chance to try it or wanted to go back to their sport even just for fun. No one should be stopping you, just don’t hold yourself back.”

Ahead, watch Memmel’s performances on vault and beam from the 2021 GK US Classic. It’s unclear as of now whether she will be at the Olympic trials this summer, though she plans on getting the other events, bars and floor, ready before Nationals next month, according to USA TODAY. Plus, she noted at the end of our interview last fall, “I know how hard it is to make an Olympic team, and just the field of athletes right now is incredible. But even if there would be a slim possibility, why not give it a shot and just see what I can do?” No matter what, Memmel’s comeback is downright inspiring to witness.