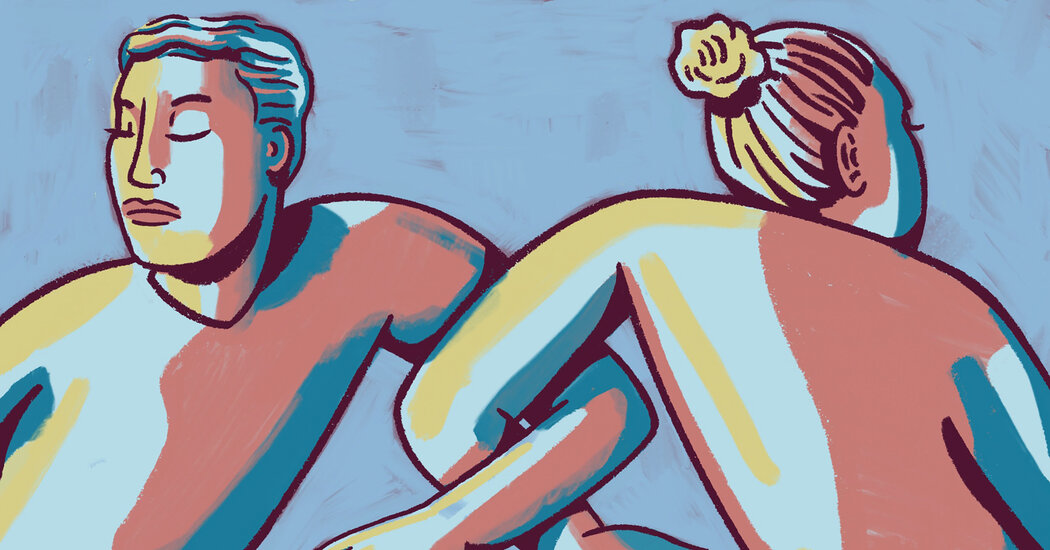 Trent and Denise Montagu never stopped caring for each other after their divorce. “I didn’t ever stop loving Trent,” she said “I stopped wanting to be in marriage with him, which is different.”

In Unhitched, couples tell the stories of their relationships, from romance to vows to divorce to life afterward.

Trent and Denise Montagu of Colorado divorced after 22 years of marriage, when substance abuse and old patterns created a wedge between them too large to bridge.

Age when married Both 26

Where did they grow up?

He, in Buffalo, the oldest of four boys. His parents divorced when he was 9 and both remarried successfully, yet his takeaway was to never get divorced himself. An only child, she was born in Augsburg, Germany, and immigrated to Canoga Park, Calif., for elementary school. Later, her family moved to Loveland, Colo. Her parents divorced when she went to college.

How did they meet?

They had friends in common and connected in a bicycle shop in Fort Collins, Colo., where he was then working. They were 23. He went above and beyond fixing her bike; she took him to lunch as thanks.

What drew them together?

They had shared common interests, like a love for Frisbee golf and live music. “Trent is artistic and outdoorsy, kind and gentle,” she said. “I liked who he was.”

Why did they marry?

Both say marriage seemed like a logical step. “I remember saying, ‘Other people are getting married, maybe we should?’” he said.

How were the early years?

Both say they were fun. The two went camping, found good jobs, and got a dog. “We were carefree and figuring out how to be grown-ups,” she said.

They bought a home. In 1997, they welcomed the first of their three children, and she quit her job as a social worker.

For more than a decade the relationship went well: They even spent several stints living in Mexico with their children.

“I allowed Denise to take care of me in much the same way as my mom had,” he said. “She took care of the money, the house, the kids and the logistics. Who wants to take care of a man child as well?”

He began to check out with drinking and recreational drugs.

For her, the seeds of resentment began to grow. There was a cycle, she said. “Trent would check out, I would reel him back in, he’d check in for a little bit but never completely, then check farther out than the time before,” she said. She felt lonely, and as a result, became involved as a school board member in their community.

“I over volunteered everywhere, looking for validation and appreciation,” she said.

In 2013, an incident involving his substance use created a rift between them.

“Outwardly we looked very happy — I was a party to keeping that illusion alive,” she said. Plus, she hoped he would change.

Did they try to work things out?

She had been in therapy for many years, and they started couples counseling together. There he recognized unresolved issues from his parents’ divorce and saw his role as a people pleaser.

[Sign up for Love Letter and always get the latest in Modern Love, weddings, and relationships in the news by email.]

Who asked for the split?

She did, but he didn’t resist. He said he wondered if they were giving up on an 80 percent good marriage. “I wanted the best for Denise, but I wasn’t sure anyone ever gets 100 percent,” he said.

For her, it wasn’t 80 percent, and she felt the good percentage was on the wane.

In 2016 they separated. First, he moved to the basement, but not much else about the relationship changed. A few months later, someone asked her out for a date. She checked in with him about her wish to accept the invitation and at that point he moved out.

Did they feel a stigmatized?

Yes, he hadn’t lived in an apartment for decades and he felt judged for doing so.

As a public figure in their community, she felt people had opinions about her decision to split. “No one knew the extent of our problems, but I also felt judged,” she said.

How did they fare financially?

The divvied things up without a lawyer; she bought him out of the house. Both felt confident they could agree on the financial arrangements. “Neither of us wanted to punish the other,” she said.

How did they move on?

She began dating the suitor that had appeared before, but in retrospect she thinks she may have jumped into that relationship too soon. “Even when you think you are, you may not be ready,” she said. “I hadn’t realized my heart was so broken.” Two years later, she married this man and is happy with her decision.

He began seeing a therapist and said he felt “a hiccup” when she started dating. He stopped self-medicating with substances and looked at his issues in therapy.

How did the children react?

“The kids saw the writing on the wall before we did,” she said. Everybody adapted. He is more present for them now, they both agree.

What would you have done differently?

Talked more, he said. “I should have addressed my shortcomings sooner. Denise needed more connection with me.”

“I felt I did everything I could do, but I needed him to do it with me,” she said. “I resented him not participating, and he resented me for controlling everything.”

The two are close friends. “I can’t imagine my life without Trent,” she said. “I spent half my life with him and I still really like him.”

Her current husband is close with Trent, and Denise is friendly with her new spouse’s former wife.

Has either person changed?

She says she values her close relationships more and is conscious of not being controlling, both with her current and former spouse. “I’m less hard on those around me,” she said. “I am more accepting of what life is and not what life is ‘supposed’ to be.”

He agrees they both have changed in ways that they both wanted the other to change during their marriage. He stopped abusing alcohol and drugs and took control of his finances and other life decisions. “I now take care of myself entirely and don’t rely on Denise or my mom to remind me to do things, buy new clothes, play bills, exercise, lose weight, make family vacation plans and so on,” he said. “The parts of me that have changed are the parts that I’ve spent a lifetime avoiding. The divorce forced me to really focus on myself and finally grow up.”

What advice would you offer others divorcing?

Go to therapy together, he said. “Therapy is like taking to car to the mechanic for periodic adjustments. I encourage people to get through any stigma they may feel about therapy.”

“Be kind and compassionate,” she said. “The other person is someone you loved enough to marry and build a life with. I didn’t ever stop loving Trent, I stopped wanting to be in marriage with him, which is different.”