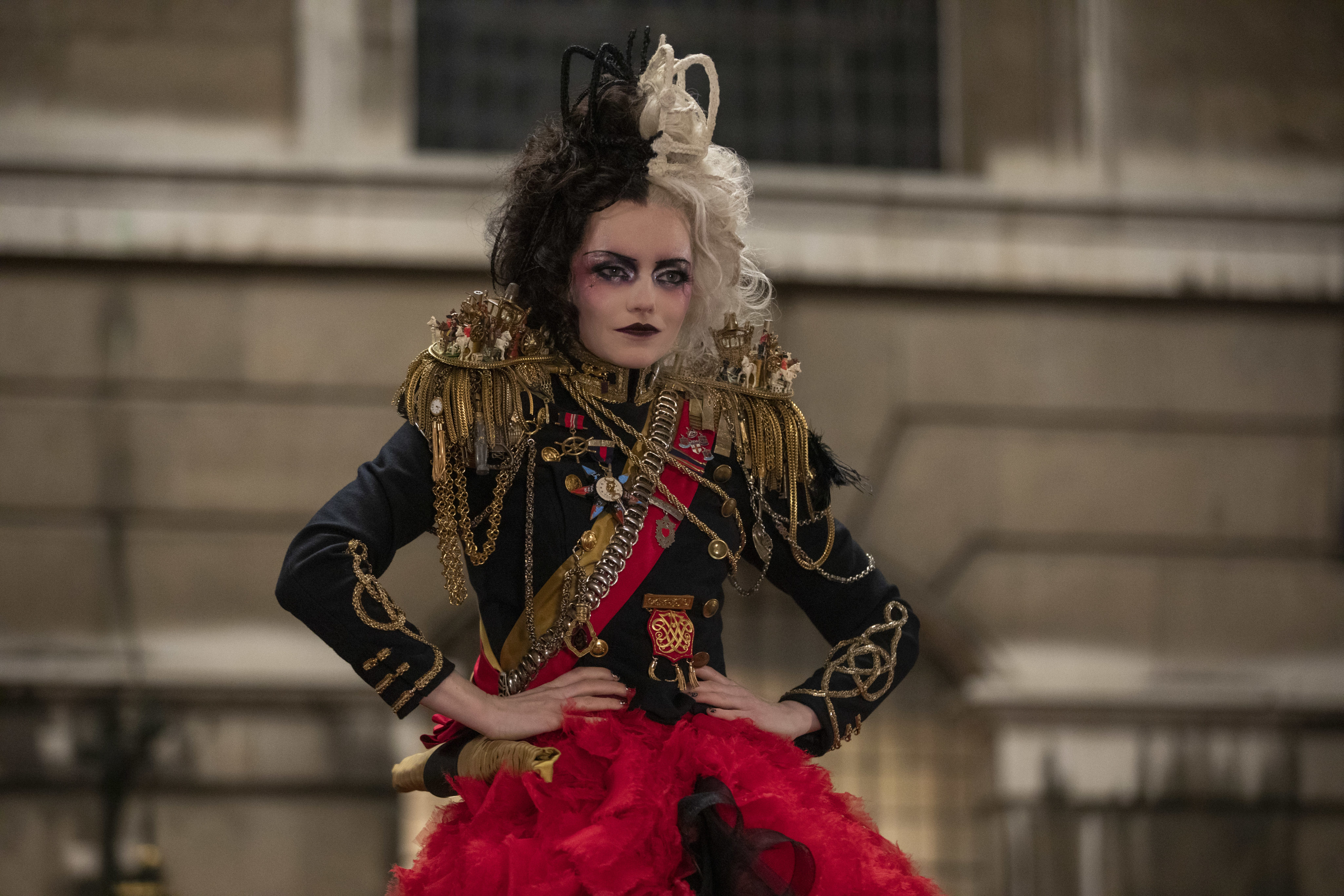 Emma Stone rocks an English accent and over-the-top costumes in this fashion-filled prequel.

Every villain needs a captivating origin story — and Disney’s Cruella is dripping with bold fashion, makeup and hair looks that are perfectly suited for the world’s most glamorous on-screen criminal. Inspired by Glenn Close’s frighteningly eccentric Cruella de Vil in the 1996 film 101 Dalmations, Cruella gives us a glimpse into the character’s early life and follows the events that lead to her evolution into the Cruella de Vil we all know now.

The film premiered in Los Angeles last week, and though it won’t be officially released until May 28, there’s no shortage of fashion and plot details to capture your attention ahead of time. Here’s everything you need to know about Craig Gillespie’s Cruella.

What’s the plot of Cruella?

Oscar-winning actor Emma Stone dons an English accent as Estella, a young designer who hopes to make it big in the fashion world amid the punk-rock revolution of 1970s London. She is hired by industry legend Baroness von Hellman (Emma Thompson), and from here, we see Estella’s transformation into the infamous Cruella de Vil.

“In this film we get to see how she became the villain we know today,” said Stone in a promotional video for the film. “Once you put this wild black and white hair, this incredible makeup and these completely unique costumes on, you feel like Cruella de Vil.”

Where did the inspiration behind Cruella’s fashion and beauty looks come from?

Hair and makeup designer Nadia Stacey told Vogue that there were “no barriers” when it came to brainstorming for the film’s many looks. Inspiration came from all different time periods; she studied makeup and wig references from the 18th-century, looks from 1950s and 1960s, avant-garde hair sculptures and, of course, 1970s punk.

Cruella’s signature black and white hair is arguably her most identifiable feature. The film approaches Cruella’s hair in an interesting way, by choosing to mask it at first. When we meet Estella, she sports a grown-out shag that’s dyed red to hide her natural two-toned hair and conform to societal standards of beauty. Stacey said this hairdo was meant to represent someone who’s grown up in 1970s London. As the story progresses and Estella transforms, she ditches the hair dye and lets her natural black and white hair shine.

The hair and makeup transformations in this film are indicative of Estella’s growth as a character. When we first meet her, she dyes her hair red out of fear that her natural hair will be perceived as odd or unattractive. As she moves further and further away from the status quo, we see her actively embracing a new, individualistic identity.

How does Emma Stone’s Cruella differ from Glenn Close’s Cruella in 101 Dalmations?

Stacey said she wanted to be respectful of Close’s look, and specifically pay homage to it in Stone’s first appearance as Cruella de Vil. When we first see Stone as the fully formed Cruella, her hair and nails are styled similarly to what was worn by Close in her adaptation of the role. But since this is an origin story, Stone’s Cruella takes on her own identity style-wise, and is ultimately different from the Cruella we see in 101 Dalmations.

Despite the film’s distinctions from the 1996 Cruella de Vil, Close is an executive producer of Cruella, which tells us there will be some influence and inspiration from the original film.

What fashion moments can we look forward to seeing in Cruella?

Cruella’s signature colours are black, white, grey and red (for moments of particular importance). The film will no doubt be filled with jaw-dropping fashion, but here are three of our favourite looks thus far.

Cruella has a show-stopping moment in this red dress. She enters a Marie Antoinette-inspired black and white ball in a mysterious white cloak. She then sets the cloak on fire to reveal a red ballgown, inspired by Charles James’s “Tree” dress housed at the Metropolitan Museum. At this moment, her red dress stands in stark contrast to the rest of the room’s black and white outfits, which is indicative of Cruella as the ultimate outsider.

In this scene, Cruella stands on top of a car wearing a long scarlet skirt and custom-made jacket with miniature horses and carriages on her shoulders. Her skirt, made by costume designer Kirsten Fletcher, is so long that it wraps around the car she’s standing on.

The film’s punk influence comes through in an iconic look where ‘‘The Future” is written in black makeup across Cruella’s pale face, almost as if she’s wearing a black mask. For this look, Stacey copied the font used on the Sex Pistols’ 1977 album cover Never Mind The Bollocks.

We can’t wait to get to know Stone’s Cruella de Vil a bit better when the film is released on May 28.