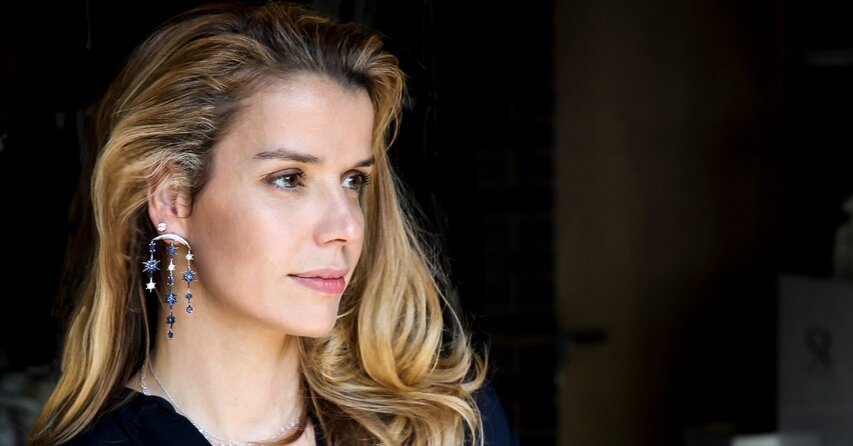 The London-based designer says she had to take control at both of her brands: “I needed to learn everything.”

LONDON — Disrupter, fixation, opportunity. The pandemic has been all that and more for jewelry fans and designers alike.

The German-born designer has two brands: the high jewelry line that carries her name (one-off pieces priced from 10,000 pounds, or about $14,095) and Atelier Romy, which sells trendy pieces like stackable chain necklaces and ear party studs online for £50 to £500.

And now that England is easing restrictions, she said, both lines are emerging as direct-to-consumer businesses — and are linked more closely to her own identity as a craftswoman.

“Workmanship is absolutely apparent in everything Sabine does,” said Marisa Drew, a senior investment banker in London who has jewelry from both of Ms. Roemer’s brands. “There’s always a personality in her pieces and she really approaches her designs with a story in mind.”

“She sits down with you and really creates something that fits you. For me, it’s all about flexibility,” said Ms. Giovanna, who also wears both lines. “I work in a high-intensity environment, dealing with big businesses, and I want pieces that I can dress up and down. Both brands deliver that.”

Last year’s lockdown, however, was “a make-or-break moment,” Ms. Roemer said, especially for Atelier Romy, which was only three years old when the pandemic hit.

“I was forced to look at every single aspect of the business, and not just entrust it to others,” the 41-year-old designer said, admitting she had focused on creation and clients. Suddenly she couldn’t just help clients dream up high jewelry pieces like a pair of diamond and pearl earrings topped with 17-carat citrines or work on a philanthropic collaboration like the jeweled rendition of a postage stamp she created for the Queen Elizabeth Scholarship Trust in 2017 to celebrate the queen’s 65 years on the British throne.

In March 2020, Ms. Roemer canceled her shipping agent. She hadn’t been entirely happy with its service and decided fulfillment should be handled in-house. “I packed, I shipped and tied the ribbon around every box,” she said. “I needed to learn everything — my accountant joked that it was like McDonald’s, where you have to start in the kitchen and work your way up.” (A handwritten card now accompanies every order.)

Ms. Roemer and her team also focused on Atelier Romy’s social media presence, creating stronger digital content and visuals that highlighted Ms. Roemer as the maker behind the jewels. She wouldn’t share sales figures, but Ms. Roemer said shoppers must have liked the changes, as sales increased fivefold.

It’s the kind of online marketing that is here to stay, said Juliet Hutton-Squire, head of global strategy at Adorn, a jewelry market intelligence firm.

When consumers couldn’t spend on travel, she said, they began spending more on luxury items and investment pieces. Fashion brands were well positioned to capture those sales, thanks to their early investments in digital, and “brands with an online presence or shoppable content on social media were even further ahead of the curve as mobile phones became the way we shop,” Ms. Hutton-Squire explained. “That is just going to continue. We are not going back from this.”

In many ways, Ms. Roemer’s early career — which began as a 15-year-old goldsmith apprentice in Germany — led to her roles as a businesswoman and jeweler today.

Crafting jewelry, she said, is not all about “tools, craft and creation,” as she had once imagined. “You soon realized you also have to be good at physics and math, chemicals and chemistry. Thankfully, those were my favorite subjects at school.”

Atelier Romy has exercised her mathematical brain even more. “I love data,” she said. “I find it fascinating sitting at home in lockdown and just looking at data and who’s coming into the virtual shop.”

After graduating from Pforzheim Goldsmith and Watchmaking School in Germany, Ms. Roemer joined Stephen Webster, a London designer she said she particularly admired as “a craftsperson and not just a designer.”

More work for other Bond Street houses followed, plus orders from private clients — turning the early 2000s into something of a golden era for Ms. Roemer’s high jewelry career. Her philanthropic work also was recognized, especially several custom pieces she made in collaboration with the Nelson Mandela Foundation, like a gold, diamond and emerald bangle inscribed with the South African president’s prison number; Morgan Freeman wore the piece to the 2010 Oscars as a best actor nominee for “Invictus.”

Ms. Roemer said the experience showed her how jewelry could be a form of storytelling. “The easy thing to do was put a bling diamond piece that gets attention, but I wanted to put Mandela’s story on the red carpet,” she said. “In the end, jewelry is emotional — you wear it every day on your skin. I don’t wear my grandmother’s handbag every day but I do wear her ring. It’s close to me, and really carries that emotional value.”

Atelier Romy — a name inspired by the birth of Ms. Roemer’s first daughter, Romy — was created as an affordable ready-to-wear line to be sold exclusively online. “I wanted to portray something a bit different,” she recalled. “Something with strong bold designs but still modern and zeitlos” — German for ageless — “depending on how you’d layer and make it your own.”

Valery Demure, the London-based brand consultant who represents several independent jewelers (but not Ms. Roemer), said: “Sabine interests me because she doesn’t come from a jewelry family. Everything she’s learned has been through hard work by herself, and the fact that she has all these skills. She is a woman with a real soul and purpose.”

That sense is increasingly relevant in a post-pandemic world. Ms. Hutton-Squire said the pandemic’s “enforced pause button” highlighted the importance of sustainability and the environment, spurring jewelers to act online in more authentic ways. Whether that was creating, for example, a playlist for meditation or sharing home recipes, “it wasn’t all about sell, sell, sell,” she said. “That really kind of separated the authentic bands from the less authentic ones.”

That also explains the growing demand for craft — something Ms. Roemer said she had experienced prepandemic with some of her high jewelry line’s female clients. “They have a very different mind-set: asking who made it and what it is. It’s less about the stone, how big it is and the carat size,” Ms. Roemer said. “They just want to express themselves and their personalities through jewelry.”

She has been bringing the sentiment online. Atelier Romy now has weekly drops of “how to style” videos and footage of Ms. Roemer at the workbench, cutting, soldering and shaping metal, always among her most popular posts. “Few people really know how jewelry is still made,” she said. “It was nice to take people into the workshop and show them the process.”

In March, Ms. Roemer introduced Cornerstones, her first high jewelry collection in more than 10 years. The extra time in lockdown has been a creative boon, she said (“I always found the best pieces happen in the workshop when you don’t have a plan”) and the collection of nine pairs of earrings were muses on travel, with multifunctional pieces like sea-inspired blue topaz, aquamarine and diamond transformable earrings that Ms. Drew purchased.

Ms. Roemer said she hopes to resume meeting clients from both brands, which, thanks to the pandemic, feel more complementary than ever. “It’s like having two babies — you can’t pick a favorite one, they’re equally important,” she said. “But also very different.”