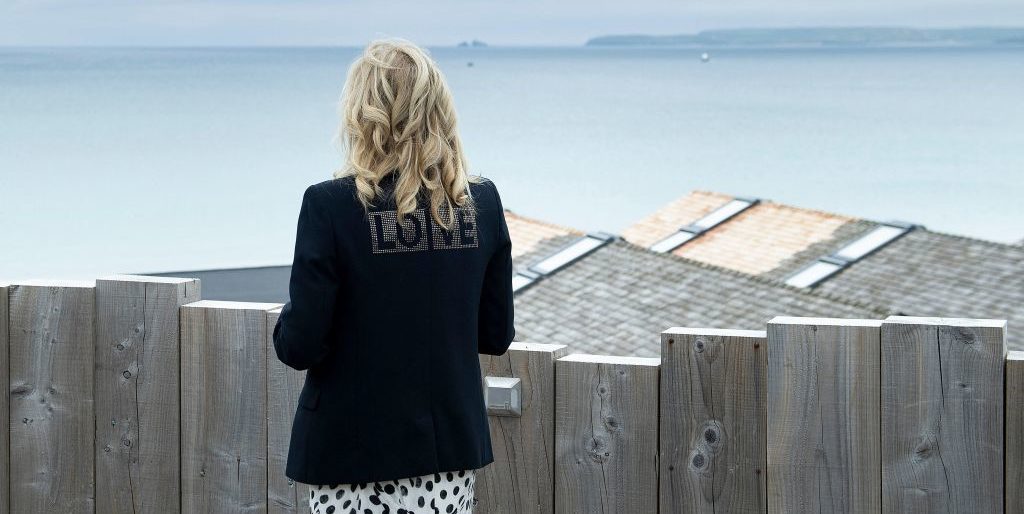 The First Lady’s wardrobe choices are a stark contrast to those of Melania Trump.

Dr. Jill Biden is many things — an educator, author and First Lady of the United States. But we didn’t know she was also a supreme trolling expert. While stepping out during a G7 appearance in Cornwall, U.K. on June 10, Dr. Biden took the opportunity to send a message to the world and perhaps more specifically, former First Lady Melania Trump.

Her choice to wear a black and white polka-dot dress by American designer Brandon Maxwell was of note given Trump’s preference for sporting luxury European brands instead of those based in the US of A. But it was Dr. Biden’s jacket by French brand Zadig & Voltaire that caught everyone’s attention thanks to its more overt messaging about something universal and much needed at this point: Love.

The studded wording embellishment was reportedly Dr. Biden’s idea, so let’s also give her props for reworking a beloved closet item, hello! And it’s clear why she opted to update the piece. The world has been plunged into chaos and despair in so many ways, and the sartorial signal acknowledges what the current U.S. administration considers necessary to face ongoing daily challenges.

Her style move was also a straight-up nod to Trump’s discomforting 2018 outing in a Zara jacket emblazoned with the words “I really don’t care do u?” It felt like a monumental troll at the time, but Trump has been, well, trumped in that regard.

While we might not see another masterful wardrobe wink like this again, what we can be sure of is that Dr. Biden will continue to be an ambassador for U.S.-based brands. From the custom Markarian ensemble she donned for the presidential inauguration in January to other appearances in looks by Gabriela Hearst and Jonathan Cohen, she’s aware of the power of her platform and what it can do for the #shoplocal movement.

Dr. Biden’s championing of the re-wear is also important; for an appearance with Kate Middleton during the same G7 trip, she wore a hot pink jacket over a white dress — a combo she was seen in this past April. We’re sure she and Kate got along swimmingly given the duchess’s penchant for pulling out formerly-worn items herself.