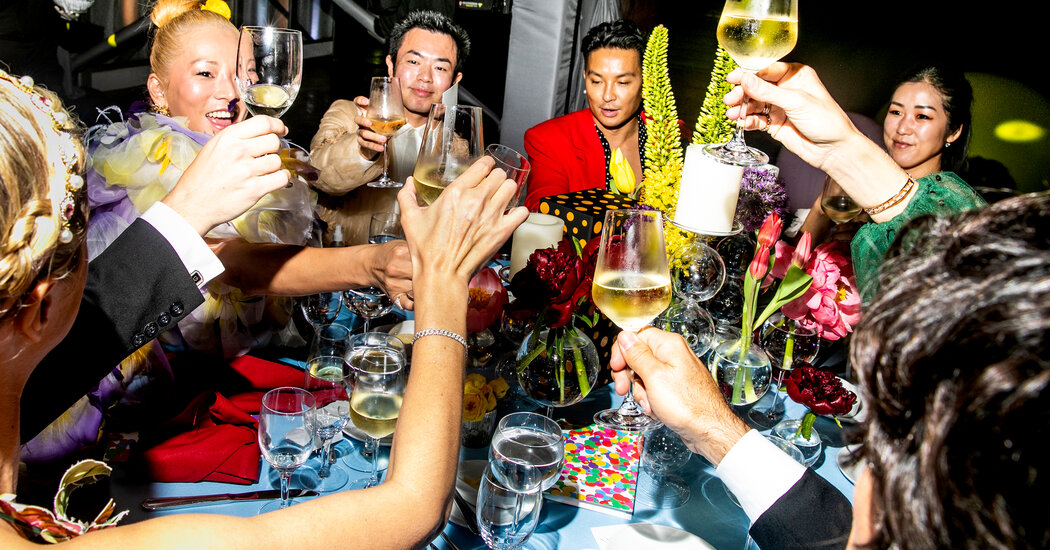 The first major black-tie gala of the not quite post-pandemic era took place June 3, when the New York Botanical Garden held a spring fund-raiser.

Organizers did not decide to hold the gala until late April, shortly after the installation of Yayoi Kusama’s “Cosmic Nature,” but they nevertheless managed to sell all 300 of the $2,500 tickets.

Cocktails in a tented area took place at 6 p.m. To gain admittance, guests had to show proof of vaccination at the door.

Ms. Kusama, 92, who lives voluntarily in a psychiatric asylum in Tokyo, did not make an appearance, but various attendees arrived in outfits inspired by her polka-dot sculptures.

Di Mondo, the fashion scenester, wore a bright red tuxedo with white polka dots that he had picked for the show’s original April 2020 opening, before the world came to a pause. The model Alek Wek was decked out in a bright yellow polka dot dress. Zachary Weiss, the Vogue contributor, wore a yellow polka dot tuxedo jacket.

“I made it from a shower curtain,” he said. “Literally.”

A little rain did not do much to dampen the mood.

Outdoors, by one of the pools, Karlie Kloss (who opted for a more minimal outfit: black slacks, white sleeveless top) posed in front of a giant yellow Kusama tulip. Inside the conservatory, by Kusama’s pink pumpkin, members of the Park Avenue set (Jennifer Creel, Bettina Zilkha) kissed one another hello and talked about how pleased they were to be back on the circuit.

Around 8 p.m., guests moved inside for dinner. Brooke Shields wore a vintage floral dress and sat near David Kratz, the head of the New York Academy of Art. Nacho Figueras, the polo player who appears in numerous Ralph Lauren campaigns, was in the back, seated at a table with his wife, Delfina Blaquier, and the designer Prabal Gurang.

Speeches came after masked waiters brought around a cod dish and shortly before an hour of dancing. They were short and to the point.

“It’s nice to see smiling faces again,” said J. Barclay Collins, the chairman of the organization’s board. “Welcome back!”

A celebratory, back-to-school vibe was also evident at Pioneer Works, which held an intimate fete at its sprawling art incubator in Brooklyn the night before.

Maggie Gyllenhaal, Peter Sarsgaard and Gabriela Hearst had cocktails in the lush garden and traded stories about their past year. David Byrne, who arrived by bicycle, caught up with Karen Wong of the New Museum. Jacolby Satterwhite shared art-world gossip with Eric Mack.

At 7:30 p.m., the singer and songwriter Meshell Ndegeocello performed inside a skeletal metal cage inspired by the U.S. Capitol dome (it was a sculpture by Abigail DeVille, one of three artists currently featured), before guests moved under a tent for a dinner of roasted lamb and salad greens.

Mickalene Thomas and Racquel Chevremont, who curated the exhibit, were seated near Marco Bizzarri, the C.E.O. of Gucci, which dressed many of the night’s V.I.P.s including Dustin Yellin, the center’s founder.

“I think people are in need of each other,” said Mr. Yellin, who spent much of the past year communing with nature. “We scaled this event back immensely, but still there’s a very special group of our supporters and friends, and people we love.”