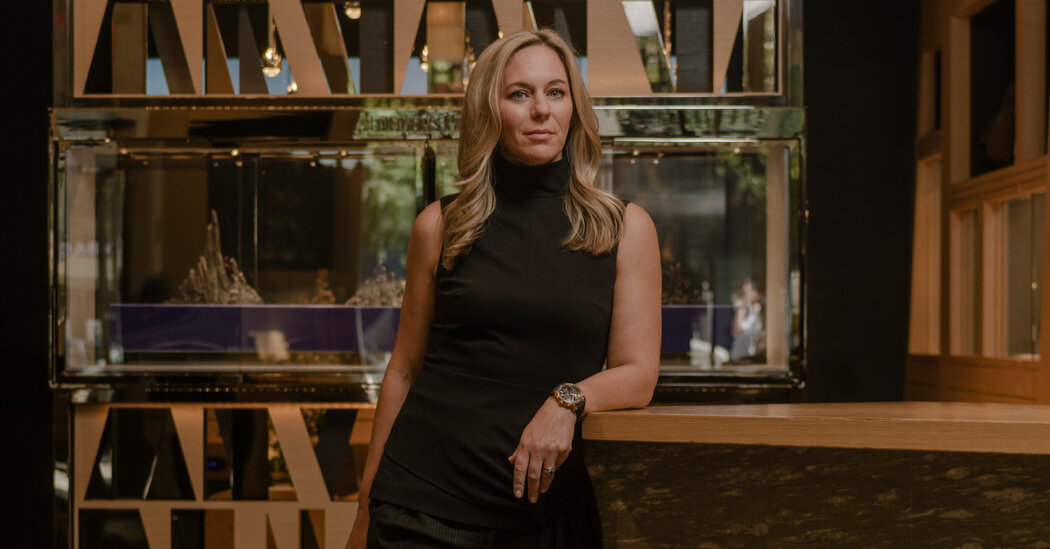 Ginny Wright, the recently appointed chief executive of the Americas for Audemars Piguet, hasn’t always been “a watch person.”

In mid-February, Ginny Wright, the new chief executive of the Americas for the luxury Swiss watch brand Audemars Piguet, added a recurring appointment to her weekend calendar: a session with a tutor, to expand her knowledge of the brand, its timepieces and the watch industry in general.

“I really want to dedicate myself to studying, to learning,” she said recently in an interview at an airy restaurant near her Midtown Manhattan office.

Those lessons were not scheduled simply to satisfy a zeal for education. Ms. Wright, 48, has quickly become knowledgeable about timepieces, but admitted, as she put it, “I wasn’t always a watch person.” Her previous experience is mostly in beauty brands.

Immediately before starting at Audemars Piguet, she was president and general manager of Kiehl’s, the skin care mainstay that offers products like Crème de Corps — a moisturizer that, at $20 for a 4.2-ounce bottle, costs considerably less than the $47,600 41-millimeter Code 11.59 chronograph Ms. Wright wears every day on her wrist.

For several months, she was taught over Zoom on Saturday mornings by Yoni Ben-Yehuda, head of watches at Material Good, a New York-based luxury retailer. In May, she took her final exam. “He said I passed with flying colors, but I had some follow-up work,” she said. “I feel like I’ve got my first degree, but now I need to get my bachelor’s, my master’s and get my Ph.D.”

The categories, Ms. Wright acknowledged, are indeed quite disparate. When she took the Audemars Piguet position, she said, “I thought at first, what can I bring?” But that proficiency should help silence skeptics who wonder how much of her beauty experience potentially applies to watches.

Nonetheless, she has found common ground between Audemars Piguet and beauty brands she has worked with, including Kiehl’s and Ralph Lauren Fragrances. Those include, she said, a strong brand identity that is rooted in heritage and a commitment to philanthropy.

Then there is the issue that many established companies face: “How do you stay modern and relevant and never take the success you have for granted?”

Perhaps with that in mind, Ms. Wright is not the only high-level executive from outside the watch world whom Audemars Piguet has hired over the last few years.

“The Audemars Piguet brand is on a path to a different type of journey,” said Olivia Crouan, the company’s chief brand officer, who worked with several spirits brands at LVMH Moët Hennessy before starting in her current position in 2018. “We are looking for some people who can have a more strategic approach, maybe, mixing an expertise in brand-building, long-term-wise, and an expertise as well in retail.”

Other companies seem to have a similar view. “In general, luxury goods companies, or at least the best luxury goods companies, have tried to create more of a diverse bench of talent rather than relying on managers that have only been growing within the industry,” said Luca Solca, an analyst at Bernstein. Examples, he added, include Antonio Belloni, group managing director at LVMH, who previously worked at Procter & Gamble.

Ms. Wright was raised in Greensboro, N.C., more than 4,000 miles from Audemars Piguet’s Swiss headquarters. Nurturing a fervent work ethic was a priority for her mother, a sales representative, and stepfather, a lawyer, who became Ms. Wright’s first boss when, at 12, she started working in his office.

“They just expected me to earn my own money and make my own way in life,” she said. “They were the old-school parents: ‘You need money to go out with your friends? How are you going to make it today?’”

Ms. Wright initially intended to become a political press secretary. In 1995, during the spring break of her senior year at the University of North Carolina at Chapel Hill, she went to Washington and, she said, “walked the halls of Congress and handed out my résumé to every single North Carolina congressman I could find.” She began working for Fred Heineman after earning a bachelor’s degree in economics and political science that year. She subsequently worked for several public relations companies.

Eventually, Ms. Wright decided to shift her focus and moved to France for a year to study at ESSEC Business School, where she earned a M.B.A. in 2007. One of the brands she learned about there was Audemars Piguet.

“I really got that sense, especially because of that arts and métier, of what craftsmanship means, and especially that people passed that down from generation to generation,” she said. “That’s where my appreciation really started.”

Still, she was passionate about beauty, and worked for L’Oréal in various roles, on and off, for more than a decade. (L’Oréal owns Kiehl’s and Ralph Lauren Fragrances, as well as other brands.) Still, she said she kept an eye on Audemars Piguet after graduate school. Approached through an executive search firm, she joined the watch brand in January.

Soon after she started, Ms. Wright scheduled individual meetings with all her employees — there are over 100 — that were held mostly in person. For some, that required flying to see them in a face shield, double masked. She asked each pointed questions about what they liked about the company and what they felt needed improvement.

“I dig deep when I get into a business,” she said. “I do a lot of interviews to understand what is going on.”

She’s been methodically analyzing the brand’s clientele and the best ways to reach them. That includes, she said, considering potential locations for future Audemars Piguet boutiques. Another priority is next year’s openings of the first American AP House, a loungelike boutique that the brand has opened in cities including London and Hong Kong. “It’s deconstructing what retail really is,” she said of the concept. “It’s not about transactional relationships anymore. It’s about connection and conversation.”

Audemars Piguet’s female clientele is also an important focus. Ms. Wright has interviewed the boutique managers in her domain — she oversees North and South America, Central America and the Caribbean — to better understand the women who shop at the brand’s stores and what appeals to them.

“Women love the idea of craftsmanship,” Ms. Wright said. “We look at it in handbags, we look at it in shoes, and I think it’s an opportunity to really bring timepieces forward for these women.”

That type of deep-dive approach, her colleagues say, is typical of the way Ms. Wright works.

“She’s a student of products, and she’s a student of consumers,” said Kia Lowe, a vice president at Kiehl’s who worked with Ms. Wright there as well as at Ralph Lauren Fragrances. “She always tried to stay on top of what the consumer trends were.”

“She always provides thought-provoking questions of the team,” Ms. Lowe said. “She’s not a dictator-type leader.”

Ms. Wright’s demeanor overall is decidedly down-to-earth. On a typical workday, she is frequently in sneakers and a T-shirt under her blazer, running between meetings. Weekends are spent with her husband, Walter Wright, a geopolitical analyst, and their two school-age children. Often, they kick a soccer ball together in Central Park near their apartment in the Upper West Side neighborhood of Manhattan, or go surfing or hiking.

“I’m just trying to be authentic and as real as possible,” she said. “I’m just not one of those people that puts on airs or tries to act like something that I’m not. Life’s too short to live that way.”