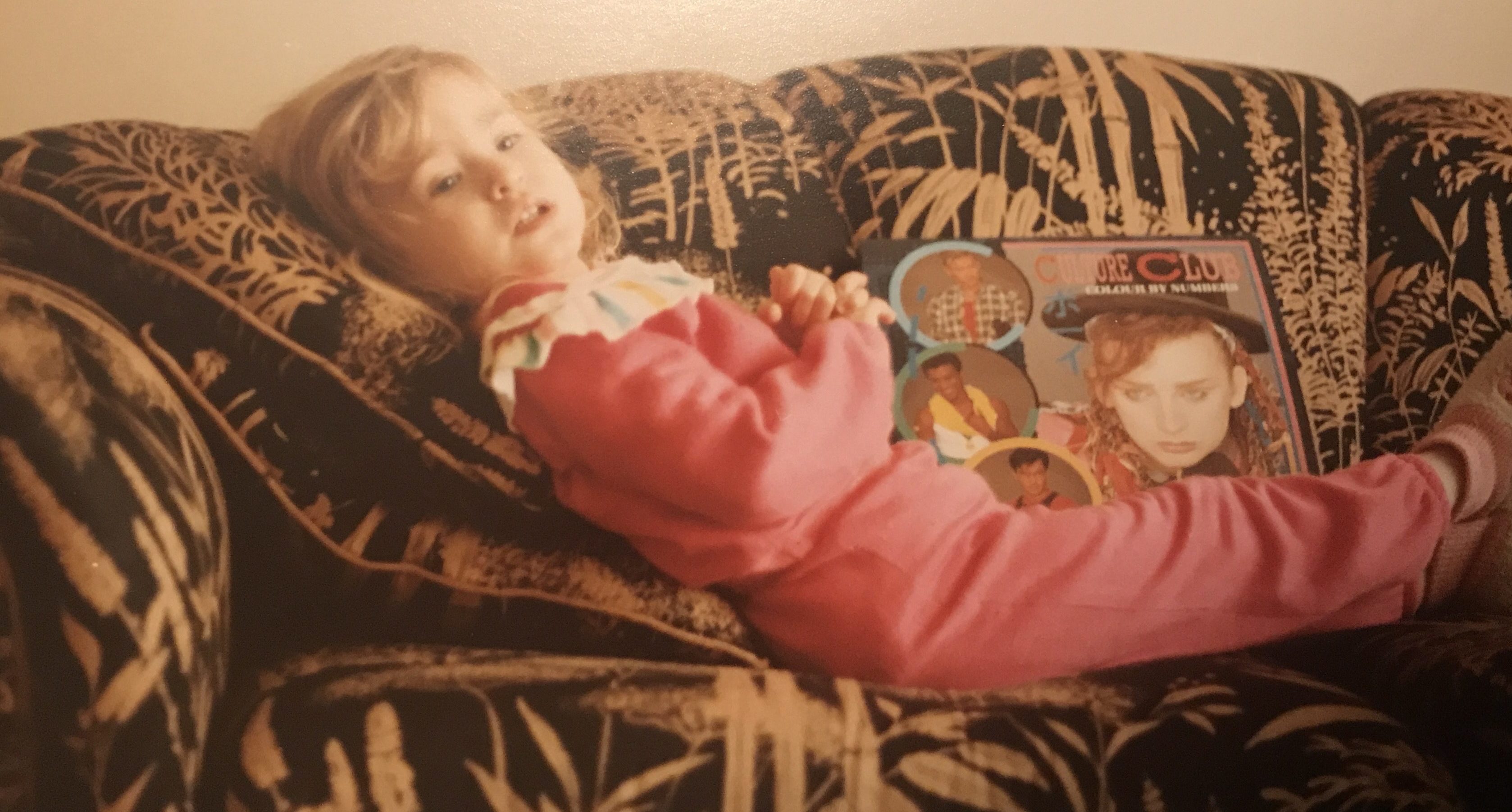 “His vibe was one that exuded scrappy self-assuredness. What’s not to love about that?”

You could say I was boy crazy when I was young. I’d toddle around the house, as my father recalls, constantly demanding “George! George! Play George, daddy, play George!” From the tender age of one — when repetition is de rigueur for a child’s development, so I’ve read — I had eyes and ears for only one person: George Alan O’Dowd, better known as Boy George (who just turned 60, by the way, and is currently working on a biopic).

So strong was my love for the vibrantly dressed, blue-eyed, soulful star that my parents put a Culture Club (the band that made Boy George famous) poster above my potty to reinforce training as connected to something good. Albums were kept both at my parents’ home and that of my paternal grandparents so I could tumble along to their tunes at a moment’s notice.

“New wave was the new sound,” my dad says of picking up Culture Club’s first record, 1982’s Kissing to be Clever. “[But] there was no filter; you were cradled to Boy George, Brian Eno and Kraftwerk.” All artists with potent visual associations — as well as the ultimate icon of our household, David Bowie. So, what was so powerful about Boy George?

“You liked the colours,” my mum says of Boy George’s OTT ensembles and dramatic makeup. And that rainbow allegiance is as strong as ever. There was also the pattern play, and the “floppy, mismatched” glory of Boy George’s style. He had the magpie’s eye that’s strongly tied to a thrifter’s aesthetic. I’d play dress up in my mum’s eggplant-hued coat by Canadian designer Wayne Clark to mimic Boy George’s oversized pieces then; I gravitate towards anything one-size-too-big when I shop today. And when I buy clothes, it’s almost always second-hand. Most of all, his vibe was one that exuded scrappy self-assuredness. What’s not to love about that?

My reputation for Boy George admiration was also notorious. For my second birthday, two people who worked with my dad at the Thrifty’s flagship store in Toronto — both Ryerson grads — created tiny pieces to help me replicate his style. Steven Schacht, a designer and present-day instructor at New York’s Fashion Institute of Technology, made me a headband with dangling pieces of thread to simulate Boy George’s braids. And Darryl Rodrigues (who coincidently styled FASHION’s Winter Issue 2020 cover story with Charlotte Rampling — it’s a small world, after all) kitted me out in a red leather mini-me mini skirt.

Unfortunately, no photos of me wearing them can be found; but it’s clear in other shots from the early eighties just how taken I was with the British pop star’s singular getups. And really, the same could be said for any images of me today, which all reveal my yen for the boldest, brightest garments and accessories available.

Of course, a toddler me didn’t understand what Boy George owed to other cultures, particularly Asian and Black, from his outfits to his sound to his hair inspo. And I’m grateful that as I got older I came to learn how much richer life is because trailblazers like Little Richard, Sylvester, Ryuichi Sakamoto, Tina Chow, Poly Styrene, Anna May Wong and Grace Jones have graced this earth. Speaking of Sylvester, in working on this story I came across a post by photographer and writer Craig Seymour called “A Black Gay Music Critic On: How Culture Club Saved My Life”, as well as this recent article by singer Beth Ditto. Both worthy reads, particularly given it’s Pride month.

When I asked when my attention drifted away from Boy George, my dad says with a laugh, “When he cut his hair.” But there was also the pull of adolescent desire of another kind — not for wanting to be, but to be with. As New Kids on The Block clocked my radar, Boy George was replaced by Jordan Knight. Also, I’d now say in a heartbeat that Jimi Hendrix is my all-time style hero. Yet another person I grew up listening to, who could mash together all manner of pieces for one inimitable outcome, and whose look truly caught my eye most during that often pivotal point in one’s experimentation with personal style — high school.

One could rightly argue that my mum is my true style icon, though, and she and Boy George share more than a joyful sense of dressing and passion for vintage pieces. For most of her life, my mother’s had a close-cropped hairdo. It’s a look that’s forced her to negotiate with gender norms for her whole life, with me as the witness. And Boy George has always been described as androgynous, a term that many people are pondering as the concept of gender identity and expression continues to evolve; it’s an evocative handle attributed to a visual that disrupts a long-held binary point of view.

What both have instilled in me is a sense of never feeling like I must adhere to anyone’s idea of what being “me” should look like, no matter what reactions from other’s would arise. After observing their confidence in presenting themselves however they wanted, I shaved my head at 16, and once wore jeans and a t-shirt from a Toronto pizzeria to a Chanel Haute Couture show – much to the bemusement of several fellow guests. Looking up to people who exist outside the narrow parameter that society still largely imposes created my deep conviction in the necessity of non-conformity; and I acknowledge the privilege I’ve had in holding this belief as a white, cis, straight woman.

Now, no matter what musicians might inspire me sartorially — Róisín Murphy, Steve Lacy, and Joshy Soul to name just a few — the ebb and flow speaks to my chameleon-like tendencies, and the pleasure I take in seeing others live their life out loud.