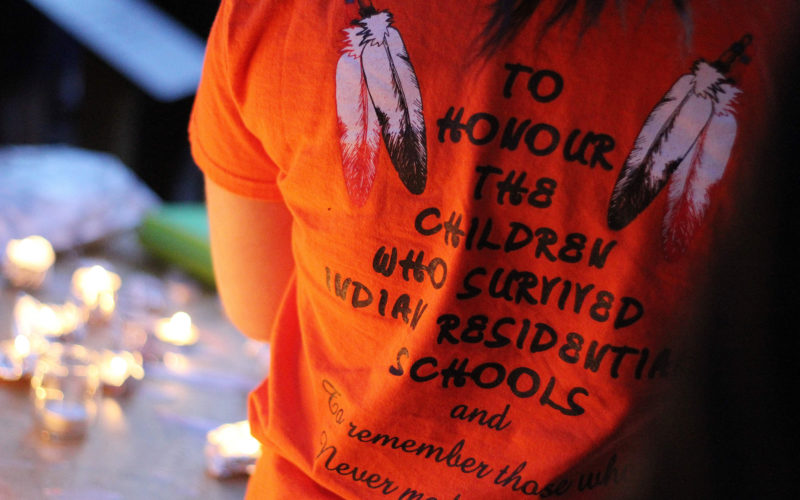 Wearing an orange shirt symbolizes solidarity with Indigenous communities during a time of grieving.

In light of the ongoing discoveries of Indigenous children’s unmarked graves in Canadian cities including Kamloops and Cranbrook, calls on social media to boycott Canada Day are growing. In the past month, hundreds of remains have been found on the grounds of former residential schools, where Indigenous children were sent between the 1870s and 1990s to be forcibly assimilated into colonial Canadian culture. Thousands of children are believed to have died in the residential school system.

To Indigenous communities, these discoveries are nothing new — there is an entire volume of the Truth and Reconciliation Commission (TRC) dedicated to “Missing Children and Unmarked Burials.” But for many non-Indigenous people, these announcements have induced a reckoning of Canada’s dark history and ongoing violence against Indigenous communities. For this reason, many are choosing to don an orange shirt instead of red and white on Canada Day this year.

What does an orange shirt symbolize?

Orange Shirt Day is an annual commemoration carried out on September 30. It is held in remembrance of residential school victims and honours the healing of survivors and their families. The date was chosen for early fall because this is the time of year when children would be taken from their homes and forced into residential schools.

What does it mean to wear an orange shirt on Canada Day?

Wearing an orange shirt symbolizes solidarity with Indigenous communities who are currently grieving the loss of their children, says Danielle Morrison, an Anishinaabe lawyer from Treaty 3 territory. Morrison is also the owner of Clan Mother, a goods and apparel business, currently based in Winnipeg.

“I’m the daughter and the granddaughter of residential school survivors, and I can’t even begin to tell you how seen and heard I feel when I witness that show of support,” says Morrison. “Those orange shirts being worn or hung on the front steps of the homes in my neighbourhood, it tells me that I’m not alone in my grief and that I’m free of the burden of being denied truth after all these years.”

Wearing orange on Canada Day also represents a call to the Canadian government to implement all 94 calls to action from the TRC, which was released in 2015. Activist Shayla Oulette Stonechild, a Métis and Nehiyaw Iskwew (Plains Cree Woman) from Muscowpetung First Nations, says it’s important that non-Indigenous people read and understand these calls to action. “Write your local MPs [and] MLAs to implement the 94 calls to action. The more public pressure, the more likely Canada will begin to take accountability,” she says.

Stonechild is from the first generation in her family who didn’t have to attend a residential school and says the trauma inflicted by them is still felt in Indigenous bloodlines. “Wearing orange is one of the most accessible ways to show solidarity with Indigenous communities during this time of mourning, as we continue to unearth graves of Indigenous children,” she says. “It is showing that you support the lives of these children, you support our collective healing process and relationship building between Indigenous and non-Indigenous people. It is not the only step that is needed though.”

Why are people calling to boycott Canada Day?

Canada Day falls after a month of painful consecutive discoveries of unmarked graves inflicting trauma on Indigenous communities across the country. Canada’s residential school system legacy lives on through its lingering impacts, and boycotting Canada Day is a stand of solidarity, says Morrison.

“I understand the difficulty that [people are] having with not celebrating Canada, given that Canada’s considered one of the best places in the world to live. But I think what Canadians misunderstand is that as Indigenous people, we were always and we continue to be sovereign nations. And that is what Canada tried to extinguish via the most inhumane tactic imaginable: they forcibly removed our most precious gifts, our children,” she says.

“All of that is nothing short of genocide, and the denial of genocide is, in fact, considered to be the final stage of genocide. So Canadians really need to ask themselves: is any of that worth celebrating? What we’re asking for is the time and space to grieve,” explains Morrison. “We’re asking for others to stand in solidarity with us, to hold space for us. Because we’re searching the earth and trying to make sense of so many lives that were lost.”

What other ways can settlers support Indigenous people on Canada Day?

As a non-Indigenous person, there are many ways to show solidarity for Indigenous people aside from wearing an orange shirt. Holding space for conversations about Canada’s history and ongoing injustices against Indigenous people is one. Indigenous populations are still feeling the effects of colonization: they are overrepresented in Canada’s prison system, facing an epidemic of missing and murdered women, and many communities don’t even have access to clean drinking water.

“Listen to many Indigenous voices. There are over 630 nations in Canada alone. We all come from diverse languages, nations and teachings,” says Stonechild, whose podcast and non-profit organization Matriarch Movement focuses on amplifying Indigenous women’s voices. “Wear orange to be in solidarity.”

Donate to the Indian Residential School Survivors Society, support Indigenous creators and businesses, and see where you can get involved. Idle No More, an Indigenous-led social movement, has provided an ongoing list of events taking place across the country on July 1 in support of #CancelCanadaDay.

Most importantly, educate yourself. “Be open to changing your perception, be open to healing your heart,” says Stonechild. “Reclaim what it means to be human in a society that is drastically losing their own humanity.”