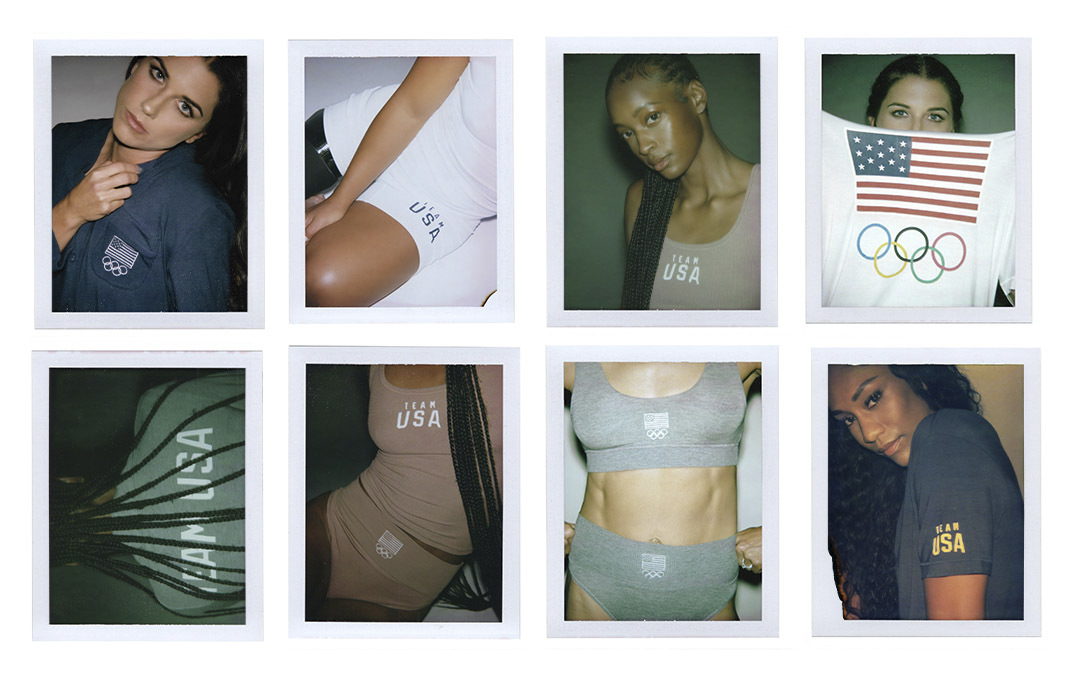 This week’s fashion news is as Y2K as it gets. With the Tokyo Olympics less than three weeks away, Kim Kardashian announced that her intimates line Skims will be the official underwear provider for Team USA. Meanwhile, Gap is embracing an early 2000s aesthetic and re-releasing its vintage brown hoodie after it went viral on TikTok. Keep scrolling to see what else caught our attention.

Kim Kardashian’s Skims is the official underwear of the U.S. Olympic Team

Yes, you read that correctly — Kim K’s line Skims is designing all loungewear and undergarments for Team USA at the Tokyo Olympics. The announcement came from a series of tweets from the celeb who wrote, “When I received the call inviting Skims to be a part of @TeamUSA, every moment I’ve spent admiring the strength and energy of the Olympians from the sidelines came full circle.”

If you want to be part of the team, no tryouts are necessary. The capsule collection will be available on the Skims website starting July 12 and includes minimalist sports bras, leggings and boxer briefs, all embellished with the Team USA and Olympics logos.

After years of protests by animal rights groups, luxury outerwear brand Canada Goose has announced its plan to go fur-free by 2022. The brand will be taking a phased approach as they end the purchasing of all fur by the end of this year and stop all manufacturing with fur by 2022. “Our focus has always been on making products that deliver exceptional quality, protection from the elements, and perform the way consumers need them to; this decision transforms how we will continue to do just that,” said Dani Reiss, president and CEO of Canada Goose.

This news comes a year after Canada Goose’s 2020 announcement stating they’d no longer be buying new fur from trappers and would instead be using reclaimed and recycled fur already part of the supply chain. The Humane Society International told the BBC the updated decision was a “momentous step in the demise of cruel fur fashion.” People for the Ethical Treatment of Animals (PETA) was equally thrilled as they’ve been petitioning, organizing demonstrations, and erecting billboards for Canada Goose to stop using fur since at least 2006.

After a 16-month hiatus, Marc Jacobs is back for Fall 2021, and he brought the space age with him. In 69 unique looks, the designer wanted to explore the importance of creativity during troubling times. Not for the fashion faint of heart, Jacobs showcased oversized proportions in the form of floor-length sleeves and extreme puffer gowns. Twiggy-esque faux eyelashes, iridescent dresses and bold prints injected an extra dose of the 1960s as models stomped down the runway in sky-high Mary Jane platforms.

Vetements is launching a new brand and “secret project”

Despite not being on the Paris men’s fashion week schedule, Vetements is still making headlines. The luxury fashion house has revealed its latest undertaking, a “secret project” that is expected to come with the launch of a new gender-inclusive, menswear-inspired brand. “We’ve created the Gvasalia Family Foundation, and we’re starting with a new experimental laboratory, a multi-dimensional platform for young talent, which could one day replace traditional conglomerate structures by redefining co-working spaces and co-creating experiences,” Vetements CEO Guram Gvasalia told Vogue. Armed with a new Instagram account, expect the unexpected when both the brand and “secret project” are released on July 22.

Y2K fashion is back, and so is Gap’s classic brown logo hoodie. Weeks after the debut of their collaboration with Kanye West, the all-American retailer is looking to TikTok to keep the online momentum going. The vintage brown hoodie made famous by TikTok creator Barbara Kristoffersen spurred a social media storm back in January and the hashtag #gaphoodie has since racked up more has 5.8 million views. A rare find on resale sites, this summer Gap will give the people what they want and drop a limited-issue release of the iconic pullover for $69.95.