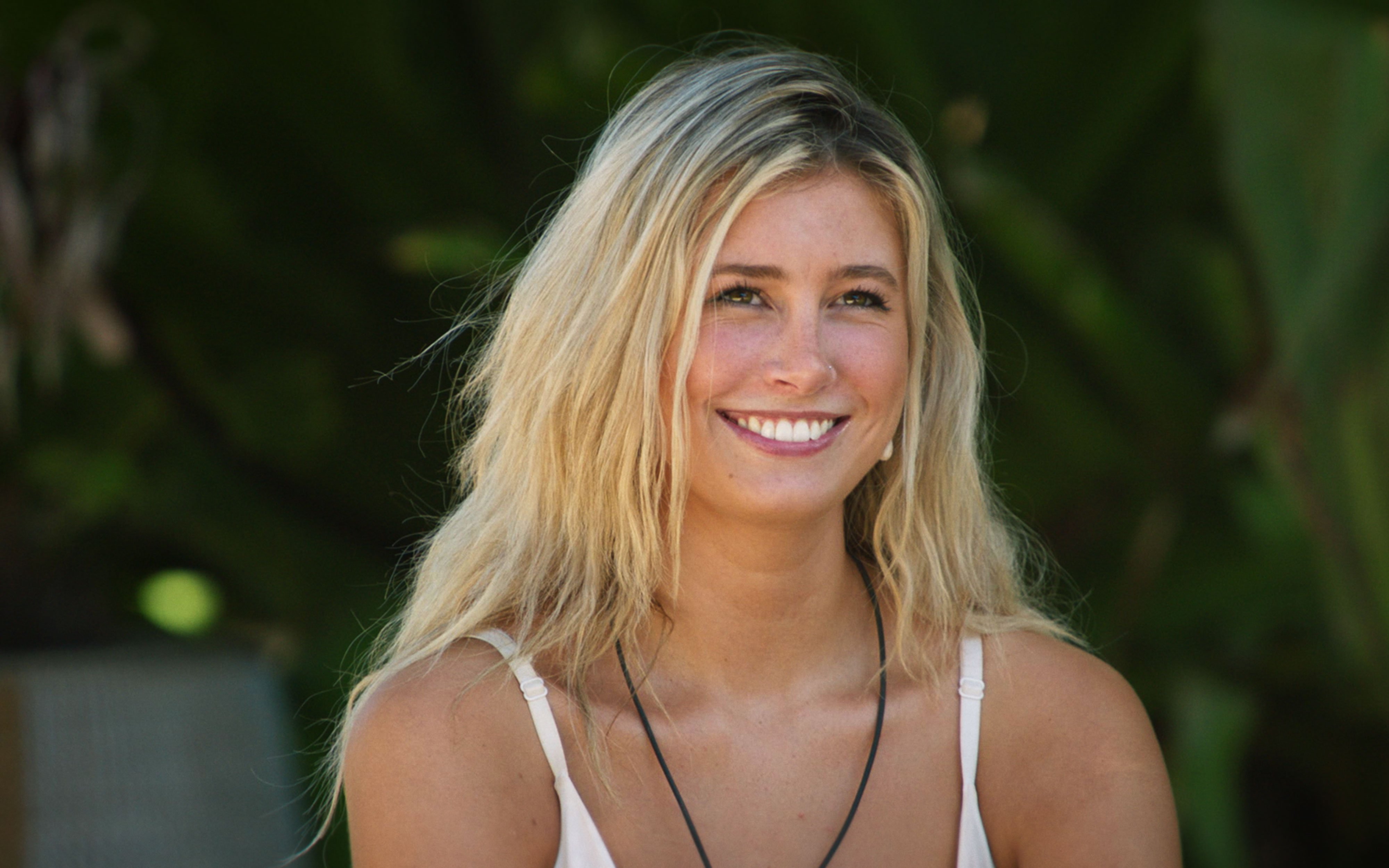 The Toronto-based model chatted with FASHION about her emotional vulnerability on the reality show.

Last spring, in the midst of the first round of COVID-19 lockdowns, the Netflix reality show Too Hot To Handle took the internet by storm. The hit show brings a group of attractive singles to a villa in a tropical destination under the guise of, well, partying and hooking up, and then reveals to them that they’re actually there to build deeper connections with one another without kissing, heavy petting, or sex. The premise of Too Hot To Handle is essentially “when you’re this hot, it’s really hard to not hook up.” And it makes for great TV.

Following the success of its first run, Netflix has newly released season 2 of the show with a fresh cast, different rules and so many plot twists. This time, contestants were brought to Turks and Caicos and told they would be on a show called Parties in Paradise, which, in retrospect, sounds too good to be true. After their first day of flirtatiously getting to know one another, the sex ban bombshell was dropped. Every time someone broke the rules, money would be deducted from the $100,000 prize pool. This did not, however, stop contestants from breaking them.

One of the biggest rule-breakers on the show was Toronto’s Carly Lawrence, the only cast member from Canada. Right off the bat, the 24-year-old model formed a romantic (and physical) connection with co-star Chase DeMoor, but it wasn’t smooth sailing. The couple broke up midway through the show, and Lawrence then got together with latecomer Joey Joy, who was one of the cast members added later in the season to spice things up. Lawrence’s rebel personality, openness on-camera and turbulent experience on the show made her a clear favourite. The self-proclaimed “man-eater” chatted with FASHION about her experience filming during COVID-19, going through a breakup on camera, and her rule-dodging mentality.

How Carly got involved in Too Hot To Handle

Via Instagram, of course! Lawrence received a DM from someone who worked for the show, asking her to apply to be on Parties in Paradise (unbeknownst to her it was actually Too Hot To Handle). She made herself memorable during the interview process. “They did a 15-minute interview where they asked questions about your sex life and your dating life,” she explained. “It was nine in the morning and I was like, ‘How am I going to stand out?’ So I did a shot of tequila.”

It worked. What followed were months of on-boarding processes, including psychological testing, background checks and questionnaires, says Lawrence. The show was then filmed from November to December 2020.

What it was like filming a reality show during the pandemic

As one might imagine, it involved a lot of COVID-19 tests. “We were COVID tested before we went in the house, once we got to the house, and every other day,” she says. The camera crew and producers remained socially distanced from the cast, so the “cast bubble” was joined by a few people who were there solely to help them and offer support. “We had people around our age that were allowed to be in our bubble. They were the people that we could get Advil from, get water from, sit with, if we were sad they could hug us. Whereas everyone else was not allowed to come near us. They were technically a part of the cast, even though they weren’t filmed.”

“I was so out of it! The crew had fake Parties in Paradise shirts on, they had a fake host — like, they did it to the nines,” Lawrence says. “I didn’t think I’d ever be cast for that big of a show. I think of myself as a weird dork, and Too Hot To Handle is a huge Netflix show. I just never would have imagined. Even on the plane there, I was like, ‘What am I filming?’ I guess looking back I was really dumb. I feel like most people probably could guess it if they were in my position and reading the contract, but I was just so out of it. I was just like, ‘I’m gonna go get wasted, party and meet hot guys.’”

How Carly reacted to the Too Hot To Handle sex ban

Not as terribly as one might think, considering she thought was on a show about partying and hooking up. “I actually didn’t mind the sex ban,” says Lawrence. “That didn’t really bother me as much as the ban on kissing, touching and heavy petting. I wouldn’t have slept around anyway, just because it is on camera.”

Not the potential $100,000 prize, for one. “I honestly didn’t even care about the money, which is so bad. I started to by the end. But I realized that the process wasn’t about the money to begin with. It was about growing,” Lawrence explains. “For me, I was like, ‘It’s just money. I’m just gonna make out with everyone.’ I was having fun, and I wasn’t thinking about it. I didn’t care if I was going to get judged, because I knew I was going to be judged regardless.”

“Every episode that you see is genuinely me,” Lawrence adds. “Who wants to look at someone who’s not genuine online? It’s too fake and it gets boring. I could tell when some people weren’t being genuine on the show. I could see it myself, and it definitely comes through on camera.”

What it was like going through a breakup on camera

“That was a lot for me personally. You could see me crying and being upset — I was in my feelings, and I was really raw and open. Watching that back, it’s easy to judge yourself. I rewatched it a couple of times trying to look at it from the outside perspective,” says Lawrence. “But it hasn’t really affected my mental health in a negative way. People have actually been really nice about it online — a lot nicer than I thought they would be.”

Having such a challenging personal moment televised has also given Lawrence thicker skin, she says. “Before, I was so focused on what other people thought of me, what guys thought about me. And now I’m just doing my own thing. I’m not worried about how someone views me, or if a guy likes me. I guess I did change on the show, and I think my journey was really touched on.”

Now that filming’s over, Lawrence says she keeps in contact with fellow cast members including DeMoor, Joy, Nathan Webb and Melinda Melrose. All episodes of Too Hot To Handle season 2 are out now on Netflix. Warning: the urge to binge watch is well, too hot to handle.

This interview has been edited and condensed for clarity.