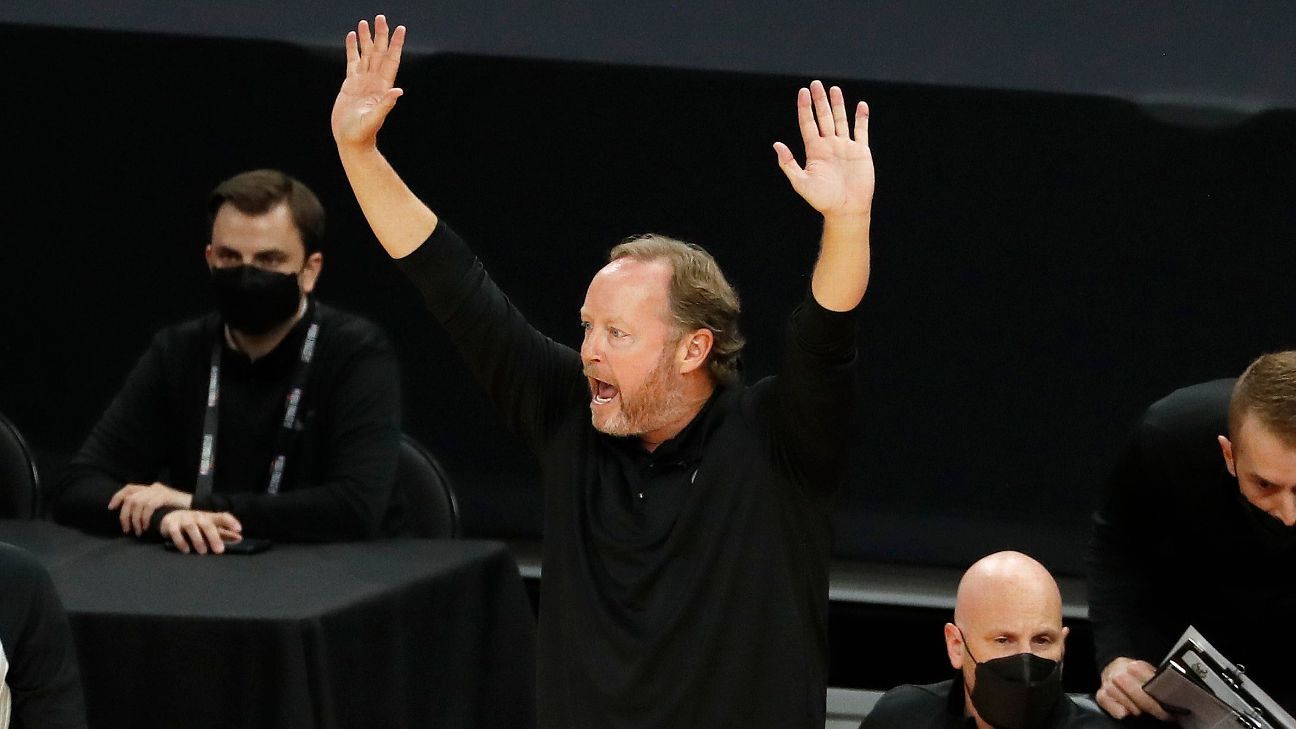 PHOENIX — After the Phoenix Suns got 26 free throws in Game 1 of the NBA Finals, Milwaukee Bucks coach Mike Budenholzer admitted the disparity in free throws in the opening game — one Phoenix won 118-105 — was “frustrating” for the Bucks to deal with.

“You trying to bait me?” Budenholzer said with a smile when asked about the Suns getting 10 more free throw attempts than his team in Game 1. “No, I mean, it’s a huge part of the game. They had 25 points from the free throw line. We’re a team that prides ourselves in defending and being able to be good defensively without fouling.

“I can’t remember the last time a team got 25 free throws in a game against the Bucks. And then conversely, the way Giannis [Antetokounmpo] attacks, the way Khris [Middleton] attacks, as many opportunities as Khris has with the ball … it’s frustrating, but it’s part of the sport. It’s part of the game.

Of the 16 games the Bucks have played in these playoffs, there was only one other time that Milwaukee’s opponent shot as many as 26 free throws: Game 2 of Milwaukee’s first round series with the Miami Heat, when the Heat went 24-for-35 from the foul line in a Bucks win.

What made that gap all the more punishing in Game 1 for the Bucks, however, was how effective both teams were at the line. Phoenix went a remarkable 25-for-26 from the charity stripe, with the only miss coming from Jae Crowder with 24.8 seconds to go in the fourth quarter.

The Bucks, on the other hand, went only 9-for-16. And while Giannis Antetokounmpo went 7-for-12 from the foul line, only two other players — Jrue Holiday (2-for-2) and Brook Lopez (0-for-2) went to the line at all.

“It’s tough, you know, teams have been getting up in me lately,” Middleton said after Game 1. “Just got to try to play through it. Can’t try to wait for the officials to bail me out. Just try to be strong with it. If they call a foul, they call a foul. But lately, they haven’t, so I just have to play better, be stronger.”

There was a similar message coming from Holiday on Wednesday. After he struggled offensively in Game 1, going 4-for-14 from the field, missing all four of his 3-point attempts and passing up some open shots to drive into worse opportunities, Holiday said he needs to be more aggressive — but that the Bucks also have to be smart about finding the right chances to do so.

“Their defense does try to take that away,” Holiday said of attacking the paint. “Again, like I said earlier, they pack the paint very, very well but we’ve got to be smart. Sell [contact] a little bit.

At the other end, though, the Bucks also are cognizant of the way both Chris Paul and Devin Booker can create contact with defenders and get to the line – especially when they get Phoenix into the penalty. That’s something Bucks guard Pat Connaughton said Milwaukee needs to focus on heading into Game 2 as it hopes to keep Phoenix from restarting the conveyor belt to and from the foul line.

“Yeah, that’s a game-by-game basis, right?” Connaughton said of balancing aggression with discipline defensively against Milwaukee’s guards. “But I also think it’s not just the fouls from being physical but it’s the fouls from being mentally locked in or knowing what they want to do. There were some fouls last night that were on shot fakes that we need to be aware that guys on their team love doing.

One thing that will help the Bucks in their quest to get to the foul line more in Game 2 is Antetokounmpo continuing to feel better after his return from a hyperextended left knee in Game 1.

After Antetokounmpo was upgraded from doubtful to questionable, and then ultimately put into the starting lineup, one week after suffering a scary fall in Game 4 of the Eastern Conference finals in Atlanta, he finished with 20 points and 17 rebounds in 35 minutes.

And, more importantly for Milwaukee, Antetokounmpo came through the game without issue, saying Wednesday that he felt good after sleeping on the injury, and he would be ready to go for Game 2.

“Everything this morning has been positive and clean,” Budenholzer said. “I think we’ll move just a little bit and I think we’ll get continued feedback in the next little bit, but so far all good.