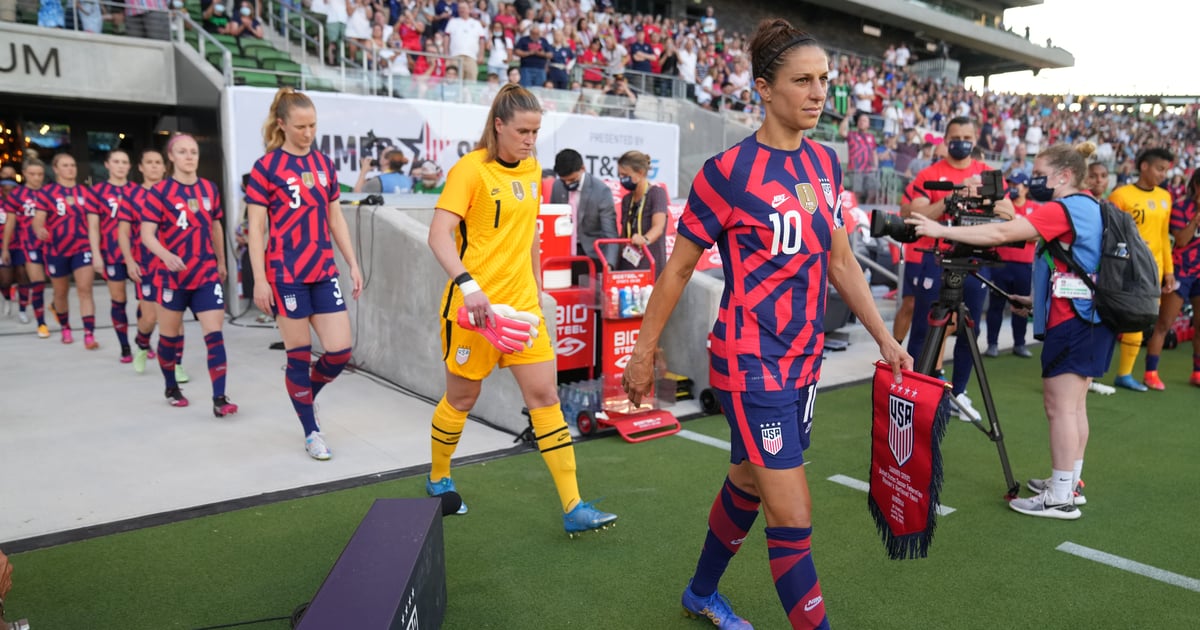 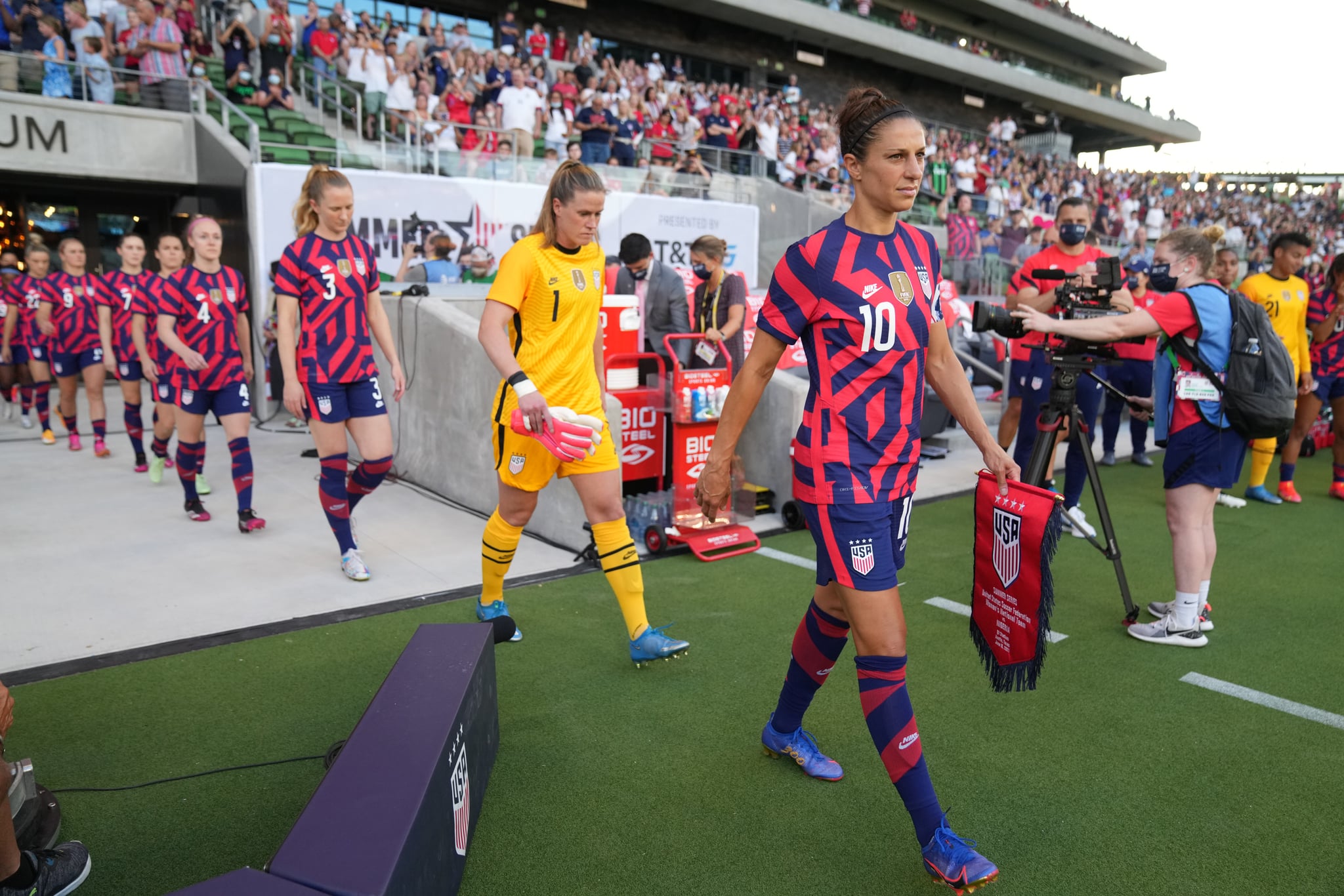 That was the chant that rang out on July 5, in a stadium in my hometown of Hartford, CT, where the US Women’s National Team (USWNT) was playing the last game of their Summer Sendoff series. It may not be the chant you’d expect from a sporting event, but it’s become commonplace at USWNT matches in the more than two years since the players filed suit against the US Soccer Federation (USSF) citing gender discrimination and unfair wages.

The US women make a strong case for increased pay. They haven’t lost a match since taking a stand against the Federation in March 2019, even winning a fourth World Cup later that year. Now they’re attempting to do something that’s never been done before — win back-to-back World Cup and Olympic titles — while the US men’s team didn’t even qualify for the Tokyo Games. In fact, the men haven’t qualified for the Olympics since 2008, while the women’s team has competed at every Olympics since the sport’s debut in 1996, winning a medal in five out of six appearances. Despite their success, the USWNT’s quest for equal pay is at a standstill, and as a fan, I find myself rooting for them in more ways than one.

Despite their success, the USWNT’s quest for equal pay is at a standstill, and as a fan, I find myself rooting for them in more ways than one.

That game in Hartford — a friendly against Mexico — was packed. Halfway through the match, the announcer said that we had broken a record with 27,758 people in attendance. My younger sister and I, now retired from our own soccer careers, sat in between blocks of elementary and middle school soccer teams with the same level of giddiness as the young girls around us.

In so many ways, I grew up with the women of the USWNT. When I got my first set of goalie gloves after making a premier team, I asked my parents for the same ones Hope Solo wore. I remember going to soccer tournaments and proudly buying Megan Rapinoe posters and Alex Morgan jerseys, never once thinking to check out the Lionel Messi or Cristiano Ronaldo merchandise. It’s not that Messi and Ronaldo aren’t talented soccer players — it’s just that when it came to soccer, I had all the inspiration I needed from the US women. I was lucky to have women role models who were undeniably great at their sport. But as I grew older, I also became aware of the inequalities and discrimination women face, including the roster of athletes I had come to admire so much.

By 2019, everything I had seen on and off the pitch seemed to indicate that a ruling in their favor was inevitable. I watched the USWNT win gold in the Olympics in 2008 and 2012, and then become back-to-back World Cup champions in 2015. A woman ran for president in 2016, and I witnessed a national conversation about women’s issues that was unlike anything I’d seen before. Progress was being made, and the USWNT were at the top of their game. Why shouldn’t they at least get equal pay?

Unfortunately, the USWNT’s path to equal pay has been anything but easy. In March 2020, a full year after the entire 28-player roster signed onto the class action lawsuit, the USSF’s lawyers claimed that the women’s game requires less skill than the men’s, a slap-in-the-face defense that earned a protest from the players and ultimately forced the president of the USSF, Carlos Cordeiro, to resign. Then in May 2020, the team and their supporters learned that their case for equal pay was dismissed. It had been so long since these players, and this community, had experienced a loss.

They are role models, activists, and athletes, carrying on their backs a Federation that refuses to grant them the respect they deserve.

While the USWNT reached a partial settlement about unfair working conditions in December 2020, they are still in the process of appealing the decision against equal pay. The team’s brief, which begins the appeal process, is due on July 23, just two days after their first game of the Tokyo Olympics. The convergence of this legal battle and their participation as the sole representative for US Soccer at these Olympics speaks to the tension the USWNT has had to navigate since 2019. They are role models, activists, and athletes, carrying on their backs a Federation that refuses to grant them the respect they deserve.

Since the lawsuit, the US women have transformed into more than just soccer players, something that’s often the case for people with marginalized identities. Women athletes, and particularly BIPOC athletes, have a long legacy of activism of which the USWNT is a part. Many of the players have been outspoken advocates for Black Lives Matter and LGBTQ+ issues, in addition to their fight for equal pay. And who could forget Rapinoe saying that she wasn’t “going to the f*cking White House” while Donald Trump was in office?

Throughout my years as a fan, I’ve seen the USWNT make many incredible plays on the field, but the thing I’m most proud of is their refusal to let women’s sports be devalued. They still have a lot of legal proceedings ahead of them, but the US women have shown themselves to be fierce advocates, in addition to some of the best soccer players in the world. Sitting in the crowd at their last home game before the Olympics, watching men, women, and most importantly, young girls chanting for equal pay, I was reminded of another popular USWNT cheer: I believe that we will win.