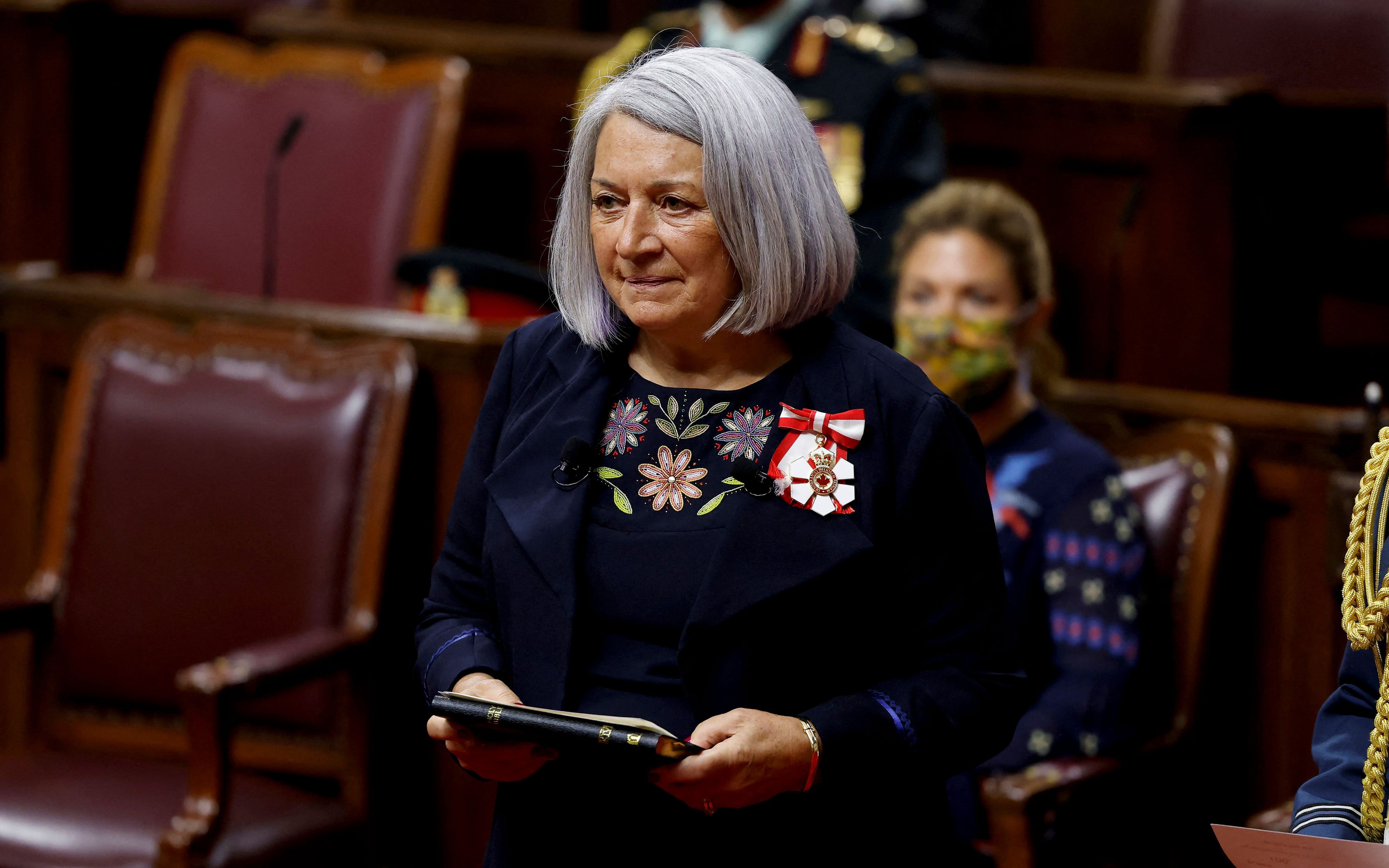 With less than a month to create the look, it truly was a race against the clock for designer Victoria Okpik and artist Julie Grenier.

It’s foolish to pretend things are back to normal in Canada. Yes, indoor dining is available. Yes, retail is once again allowed to open its doors. But since May, the country has been grappling with the (reawakened) history of residential schools and discovering hundreds of unmarked graves buried under former sites across Canada.

In such a time of grief and sadness, a very welcome bright light has been the inauguration of Mary Simon as Canada’s first Indigenous Governor General. As the Queen’s newest representative — and technically Canada’s head of state — Simon addressed the senate on July 26th with a powerful speech encouraging Canadians to keep looking for the unmarked graves and confront their past head-on.

Mary Simon’s heritage was at the forefront of the celebration — she entered the Senate Chamber to the beat of an Inuit drum — and her fashion followed suit. The new Governor General wore a chic navy dress and jacket from Indigenous designer Victoria Okpik, famous for being the first Inuk woman to graduate in Fashion Design from Montreal’s LaSalle College.

“Mary had contacted me just before the announcement with the Prime Minister,” says Victoria Okpik over a video call. “I thought she was just contacting me to say hi — I didn’t know she was appointed or anything like that. And when they announced it that morning, I was like, ‘Oh, I think she’s about to ask me for something very important.’”

The entire design process was a collaborative effort between Okpik and Simon as the new Governor General was passionate about wearing an ode to her Indigenous heritage on her big day.

“I first started sending her some sketches she might be interested in, and then we narrowed it down to a dress and a jacket,” says Okpik. The jacket was especially significant as an Indigenous silhouette inspired it. “I wanted the hemline on the jacket to represent Inuit style from Northern Canada, specifically Akuk style.”

It was also crucial to both the designer and Mary Simon to incorporate beadwork into the design. “We were trying to figure out if she wanted beadwork on it or a necklace piece instead. So when we decided that it was going to be incorporated into the outfit, I knew it was important to Mary to have someone from our region [work on it].”

Enter artist Julie Grenier from Kuujjuaq, in Northern Quebec. When Grenier first got the call, she says that “she felt honoured” and “was ready to get to work.” But it wasn’t until she spoke with Okpik that she knew how extraordinary this project would be.

“One of Mary’s visions was to have the beading be a representation of all indigenous people across the country. So it was really important to design something that wasn’t only reflective of the North or South, but really just to try and make it so that you can kind of get a piece of everyone,” Grenier says over a video call.

However, with less than a month to design, create and embellish the outfit, it truly was a race against the clock.

“I delivered the jacket [to Simon] at five o’clock the night before the ceremony,” laughs Okpik.

Grenier adds that she spent the week leading up to Simon’s inauguration beading until three in the morning. “It was about 50 hours of work. I gave my final design to Victoria last Sunday night. And then, first thing, Monday morning, I started beading. It was pretty intense — I finally slept for the first time all week yesterday, which was nice.”

Despite the workload, both Okpik and Grenier still can’t believe they got to play a role in this historic occasion.

“I was very, very honoured to be part of this and to be asked to do the piece for Mary Simon,” shares Okpik. “I don’t think [the project] weighed on me too much until the opening ceremony. I was filled with emotion right away: I was just really touched.”

Grenier agrees. “It was definitely an honour for me as well, and I’m super, super thankful. I don’t think I’ve had time to fully process everything yet, as it was such an emotional day on so many different levels. I wouldn’t have been a part of this had Victoria not reached out to me, so I’m not only thankful to have been part of the project, but to have been included by Victoria.”