Dusty passed away at his home in Houston, TX — this according to his bandmates, Billy Gibbons and Frank Beard.

They write, “We are saddened by the news today that our Compadre, Dusty Hill, has passed away in his sleep at home in Houston, TX. We, along with legions of ZZ Top fans around the world, will miss your steadfast presence, your good nature and enduring commitment to providing that monumental bottom to the ‘Top’. We will forever be connected to that “Blues Shuffle in C.” The boys add, “You will be missed greatly, amigo.”

Unclear if Dusty’s death is in any way related to another health scare he recently suffered — namely, a hip injury that the band said he had to address in the past week or so, forcing him to bow out of a string of shows across the U.S. with his bandmates.

ZZT addressed the setback on Facebook not too long ago, writing … “The members of ZZ Top, Billy, and Frank, would like to share that Dusty, their fearless Bass player, is on a short detour back to Texas, to address a hip issue. They await a speedy recovery and have him back pronto.” They replaced Dusty with Elwood Francis … who’s been playing in his stead.

The group has yet to speak on Dusty’s passing. They have a show scheduled for Wednesday night in Simpsonville, SC — but something tells us that’ll be canceled in light of this tragic news. 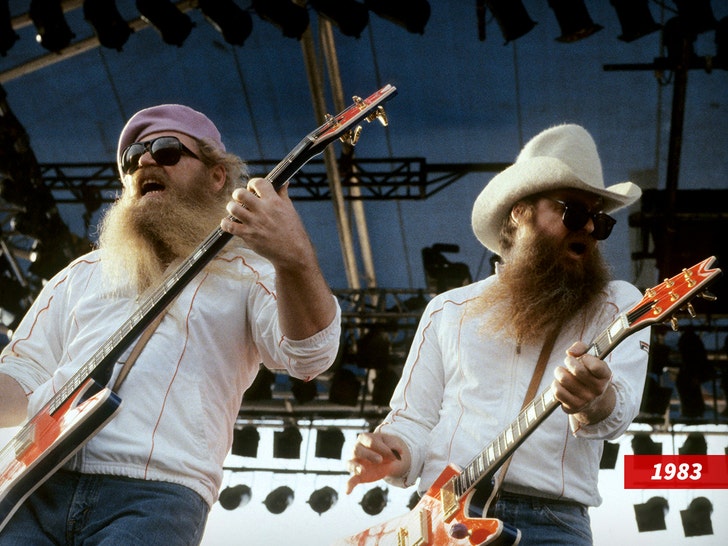 Dusty is one of the original founding members of ZZ Top — serving as their lead bass player and secondary lead vocalist since they launched the rock band in 1969. He’s also one half of the two famous bearded, sunglass-wearing men who help make up the trio … Billy Gibbons is the other.

They initially started as a blues-y act, but they eventually adopted a traditional rock sound … which they stuck with and helped them launch into the mainstream in the ’70s and well into the ’80s as well. ZZ Top has churned out a whopping 15 albums over their stories career … and are well-decorated for it, too — serving as pillars of the genre for decades.

On top of being inducted into the Rock and Roll Hall of Fame, ZZ Top has been honored and recognized by different music organizations, especially in their home state of Texas. They’ve had wild success commercially too … with several of their records having gone gold, platinum, multi-platinum and even one diamond offering in 1983’s iconic “Eliminator.”

That one produced perhaps their biggest hit to date, “Gimme All Your Lovin’,” as well as others like “Sharp Dressed Man,” “Legs,” “Got Me Under Pressure” and more.

Despite not having made a new album since 2012, ZZ Top — including Dusty himself, who’s taken to the stage countless times over the years — has continued to tour and entertain audiences.