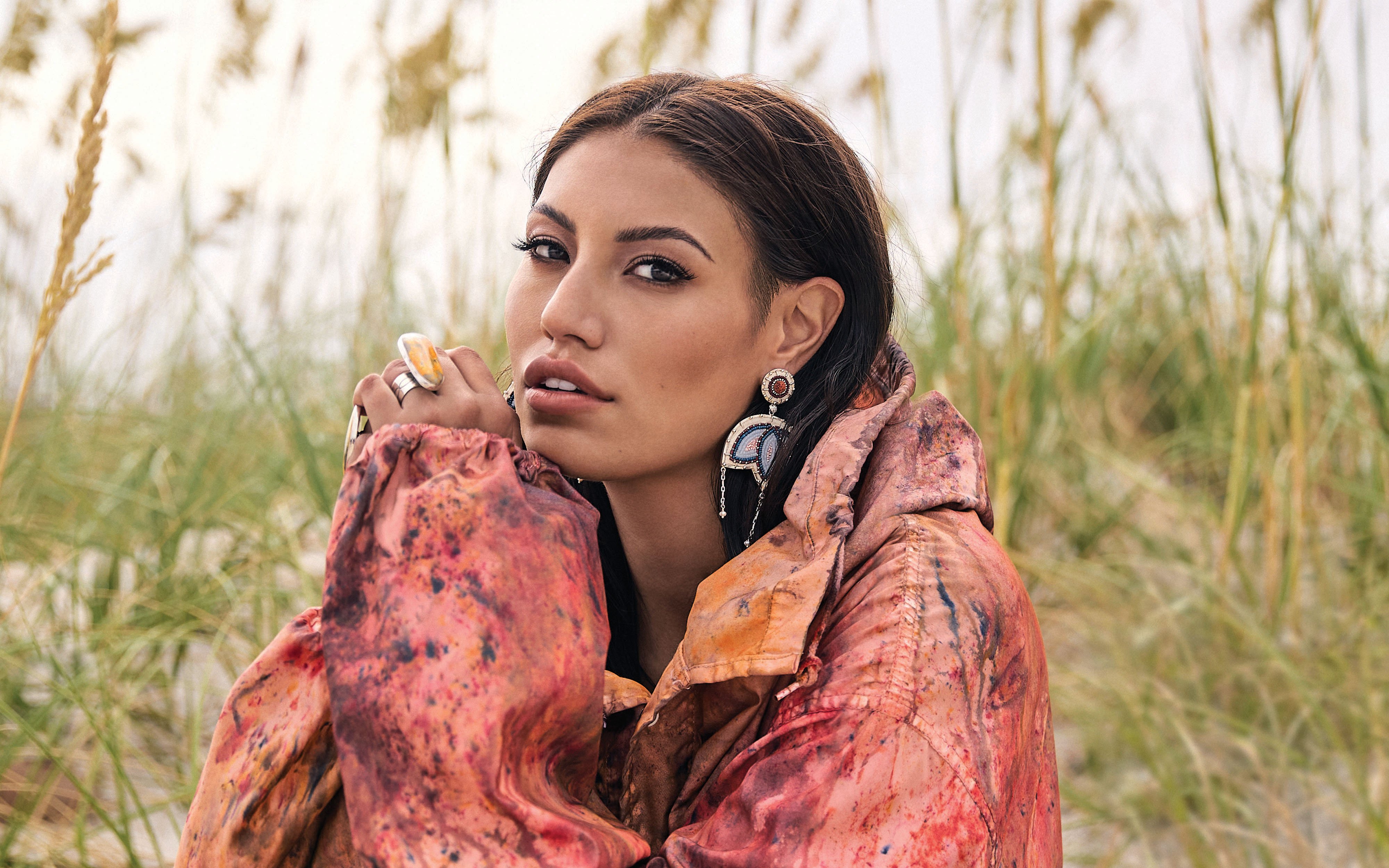 Residential schools had a devastating impact on Callingbull and her family. The actor, beauty queen, influencer and September 2021 cover star speaks to fellow Cree David A. Robertson about facing — and overcoming — intergenerational trauma.

By
David A. Robertson

Ashley Callingbull wears many hats. She’s a beauty queen who was crowned Miss Canada in 2010 and Mrs. Universe in 2015. She’s an actor, playing Sheila Delaronde on the APTN drama Blackstone from 2011 to 2015. She’s an influencer with 1,000,000+ followers on her Instagram. She’s an advocate and a motivational speaker, giving talks on mental health, building self-confidence and her Indigenous culture. She’s a brand ambassador, most notably landing a deal with Nike in 2020. And she’s a survivor of physical, mental and sexual abuse.

Callingbull has been to hell and back, but she is living proof that trauma can be overcome. She speaks with confidence and heart, often sharing her message with a cocked eyebrow, even if tears are falling. She has no fear of vulnerability or of saying exactly what’s on her mind, even if it sets non-Indigenous people off. “I’m not speaking against Canadians; I’m speaking for Indigenous people,” she declares via Zoom from Florida, where she is staying with her fiancé, Wacey Rabbit, who plays centre for the Jacksonville Icemen hockey team. “A lot of Canadians don’t want to hear the truth, but truth is our power.”

When Callingbull was five years old, she and her mother left their home in Enoch Cree Nation in Alberta for Maskwacis (formerly known as Hobbema) to live with her mother’s boyfriend. He had a “charming persona” that covered up the terrible things he did to people, describes Callingbull. The abuse started soon after the move. Her mother didn’t know about it because he threatened to kill Callingbull, or her mother, if she said anything. He told her that nobody would ever love or appreciate her (“anything to break me”), and she believed it.

It would be five years before she and her mother escaped.

Callingbull was 10 years old when she had to testify in court; for the first time, she was forced to go into detail about what had happened to her. She remembers hearing her abuser and his family laughing while she testified; when she got off the stand, humiliated, she told herself that she would never speak out again.

She felt a pull to numb the pain with drugs and alcohol, but her kokum, Charlotte Callingbull, who had also been abused, urged her granddaughter to stay on the “red road” rather than put toxins in her body. In Indigenous communities, the red road is a path to wellness fostered by our connection to traditional ways of living, ceremony, all of our relations and Mother Earth. In Cree, the word for this is minopimatisiwin, or “the good life.” “That’s our strength,” emphasizes Callingbull. She also found healing in the sweat lodge, where she could cry and pray in safety, and by coming to an intimate understanding of intergenerational trauma.

When the remains of 215 Indigenous children, some as young as three, were found near the former site of Kamloops Indian Residential School, Callingbull’s family phoned to tell her that her moshom (grandfather) couldn’t stand to watch the news. George Callingbull had never been outspoken about what had happened to him, and it was like having old wounds reopened.

George attended St. Albert Youville residential school in Edmonton from 1944 to 1948, its last year of operation. The National Centre for Truth and Reconciliation uncovered the names of 46 children who had died at the Catholic-run institution. Countless other victims are unknown. George arrived at St. Albert only speaking Cree, and this was met with a violent reaction. “They threw boiling water on him,” causing burns all over his body, says Callingbull.

Charlotte, who passed away in 2006, attended Ermineskin Indian Residential School from 1953 to 1962. Ermineskin was one of the largest residential schools in Canada. It was overcrowded, tuberculosis was widespread and there were other horrors, such as the physical and sexual abuse Charlotte endured. “She watched children starve and get put in cages,” says Callingbull, adding that her grandmother told her that a priest would impregnate young girls and then dispose of their babies.

George turned to substance abuse to mask the pain. One night, he was lying in a ditch on the side of the road when he realized that this was not who he, as an Indigenous person, was. Together, Callingbull’s grandparents turned their lives around. He became a medicine man and she a medicine woman, helping anybody who came to them.

Many Indigenous people have yet to break the cycle of harm, including Callingbull’s own abuser. He was abused by his parents, who experienced the same while attending residential school. “Everything they did to his parents, his parents did to him and then he did to me,” she says. It’s one of the reasons Callingbull doesn’t talk about residential schools as if they’re a thing of the past — the impacts of a system that only ended in 1996 are still felt today. When she’s told to “get over it” on social media, a phrase Indigenous people hear ad nauseam, she asks how that can be possible when Indigenous people are broken — and still breaking.

But Callingbull wants to make it clear that while the residential school system was designed to kill the Indian in the child, despite the staggering loss of thousands of children and the trauma that has reverberated through the generations, the government and church did not succeed.

How did that little girl, who had once vowed to stay silent, become somebody who could speak to a packed Scotiabank Saddledome in Calgary for WE Day? Or to thousands of students and faculty members at Harvard University?

Callingbull was 14 when she found her voice again. Her infant sister, Ambee, had passed away from trisomy-18, a rare chromosomal disorder. She learned that it was cathartic to talk about what she was going through. That led to her volunteering at the children’s hospital in Edmonton, which, in turn, led to a position as a youth representative. She gained strength as she shared her story more and more and began to work with kids in the foster care system who were living through their own trauma. They would tell her how glad they were that they weren’t alone. That was when she realized how powerful her voice was and how inexorably that power was linked to truth.

She put her voice to good use again in 2015, when she became the first Canadian, and first Indigenous person, to win the title of Mrs. Universe. She entered the contest even though at the time she’d considered retiring from beauty pageants. Two things motivated her: The pageant’s focus was on raising awareness and funds for domestic abuse survivors and their children — something that is near to her heart. She also knew that a federal election was coming up and was well aware that the media wouldn’t listen to what she had to say unless she did something significant.

Sure enough, after becoming Mrs. Universe, Callingbull had the media in the palm of her hand. In one of her first interviews, she addressed Missing and Murdered Indigenous Women and Girls, the foster care system, access to clean drinking water, land stewardship and environmental protection, how Indigenous people were treated like terrorists for fighting for their land and how the Stephen Harper government had failed Indigenous people. Callingbull hopes that the recent heartbreaking discoveries on several former residential school sites serve as a turning point for Canada. “It wasn’t just a system that was trying to civilize us; it was genocide, and people need to accept that,” she states.

Callingbull sees the path to reconciliation as a long-term process that requires healing to occur in First Nations communities, through spiritual and cultural programming; colonial systems to provide equitable treatment to Indigenous people; and Canadians to educate themselves so they understand the truth of this country’s past and present. “Doing this work honours the children,” she says. “It says a great deal about Canada — that it took the loss of so many children for people to listen. But now that they’re listening, we need to keep telling our stories.”

Callingbull’s moshom told her not to stop, and she has no plans to, tirelessly speaking out because she knows that others can’t. She manages the stress by keeping her mind and body healthy through ceremony and physical fitness — she can frequently be seen doing squats or poolside planks on Instagram and TikTok. Also shared: the video of her fiancé kneeling behind a treadmill with a little jewellery box, ready to pop the question when she hopped off. He, too, is in the business of breaking glass ceilings. Rabbit, who is from the Kainai First Nation, was the first Blackfoot to be drafted by the NHL.

While packing for her move to Enoch Cree Nation ahead of her September wedding, Callingbull took the opportunity to make some donations to a local women’s shelter. She sees the victims of domestic violence, like herself, as survivors. When she and her mother finally escaped the abuse they’d been trapped in for so long, they were turned away from a shelter because it had no room — she doesn’t want that to happen to anybody else.

Callingbull’s long-term vision is to create her own foundation and start her own shelters, beginning with one in her community. She wants to provide a safe space for women and children and offer them a second chance at life, because she knows what it’s like to get that chance: “I may not be a medicine woman, but I can still help people heal.”